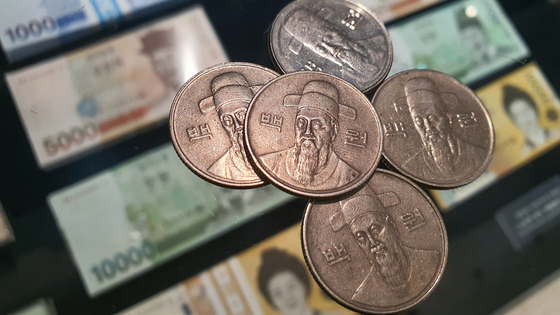 100-won coins are placed above the Korean bills in the Bank of Korea Money Museum in Jung District, central Seoul. [YONHAP]


The 100-won coin is being redesigned, as the painter of the image on the obverse had ties to imperial Japan.

The central bank on Tuesday said it will also switch the design of the 5,000-won, 10,000-won and 50,000-won bills for the same reason. It is expected to take from four to five years until the new coin and bills are released to the public.

The 100-won coin features an image of admiral Yi Sun-sin, a national hero who fought against the Japanese in the 16th century, but the image is based on a painting by Chang Woo-soung, who was born in 1912 and lived to 2005.

According to the Institute for Research in Collaborationist Activities, the artist received the recognition and support of the Japanese colonial government from 1941 to 1944 as he built his career. The institute has demanded the removal of his work from the coin.

Before the change is made, the Ministry of Culture, Sports and Tourism needs to first cancel the current designation of the portrait. The bank plans to change the design following the ministry’s lifting of the designation.

Images of philosopher Yi I, which is on the 5,000-won bill, King Sejong, on the 10,000-won bill, and Sin Saimdang, on the 50,000-won bill, have also been brought into question. The artists who painted them are included on a list of collaborators published in 2009 by the Presidential Committee for the Inspection for Japanese Imperialism. The portraits of Yi I and his mother Sin Saimdang were painted by Kim Eun-ho, and Kim Ki-chang painted the portrait of King Sejong.

The 100-won coin is the first in line for change. The current portrait of the admiral has been engraved on the coin since 1983.

“The decision on the designation of the standard portrait for the admiral is expected to come first,” said a spokesperson for the Bank of Korea. “New coins can be made by melting the current won coins, so unless there is a change in material, it will not cost much.”

The applications for lifting the designation for the 5000-won, 10,000-won and 50,000-won bills have not been submitted, but they are expected in the near future.

Culture Minister Park Yang-woo said during last month’s parliamentary inspection that he will examine whether or not the ministry can autonomously lift the designation without the applications from owners of the 13 portraits that are embroiled in the controversy.

The spokesperson added that it will also discuss measures in case the portrait drawn by a pro-Japanese painter engraved on a bank note loses its designation.

Changing the design of three types of bills is expected to cost around 470 billion won ($423 million). The Culture Ministry will take around two to three years to designate a new portrait as the standard.

“The finalization of the portrait will take around one and a half years after the decision on the new portrait,” the spokesperson said.

The central bank has also been discussing measures following the recent revelation that the engraving on the stone in front of the bank’s former headquarters, which is now the Bank of Korea Money Museum in Jung District, central Seoul, is based on characters written by Ito Hirobumi. Ito was the first prime minister of Japan and the Japanese supervisor of the Joseon dynasty during Japan's rule over Korea, which lasted from 1910 to 1945.

Some remedies mentioned include demolishing the stone, erasing the engraving, covering it with another stone and placing an informative sign explaining the relevant historical facts.