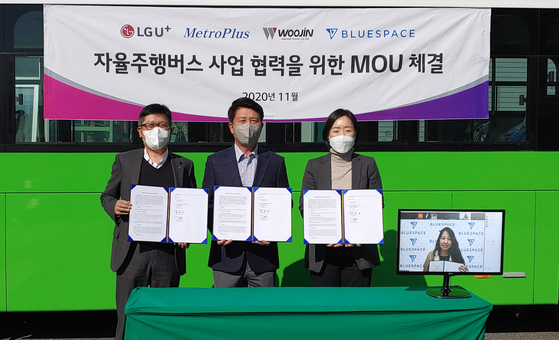 From the left, Cho Weok-seok, the senior vice president of the new business group of LG U+, Metroplus CEO Kim Tae-ho, Kim Jung-hyun, the executive managing director of Woojin Industrial Systems, and Christine Moon, president of BlueSpace.ai, during a ceremony in Woojin's factory in North Chungcheong on Tuesday. [LG U+]


LG U+ aims to develop a self-driving electric bus by 2021 through a partnership signed Tuesday.

The company said Wednesday it signed a memorandum of understanding with Silicon Valley-based start-up BlueSpace.ai, which specializes in self-driving cars, transportation parts manufacturer Woojin Industrial Systems and Metroplus, a company that specializes in user interface for vehicles.

The first goal of the partnership will be to produce an autonomous electric bus, built on existing eco-friendly electric bus technology from Woojin Industrial Systems.

The bus will use advanced communication technology from LG U+, dubbed vehicle-to-everything (V2X), while Metroplus will build an integrated system for connecting the electric bus with software. BlueSpace.ai will provide the self-driving car software.

After the development and testing process, the companies plan to carry out a demonstration for the self-driving electric bus by the third quarter of 2021.

V2X technology facilitates the exchange of information between vehicles and other objects, such as other vehicles, mobile devices and transportation infrastructure. Industry experts view the technology as essential in overcoming the limits of existing sensors for autonomous vehicles, which can absorb a limited amount of information.

LG U+ will build a system for safety enhancement as well as a control system, implementing its 5G and LTE technology in the project. The telecom company will also provide its map technology dubbed Dynamic Map, which is an improved version of GPS, according to LG U+.

BlueSpace.ai is a start-up that specializes in autonomous vehicles, founded in April 2019. The company will build software for the self-driving electric bus equipped with high cognitive capabilities to interpret the surrounding environment.

“Through this partnership, we hope to combine the technology of leading firms, both locally and abroad, and strengthen the competitive edge for self-driving vehicles,” said Cho Weon-seok, the senior vice president of the new business group at LG U+.