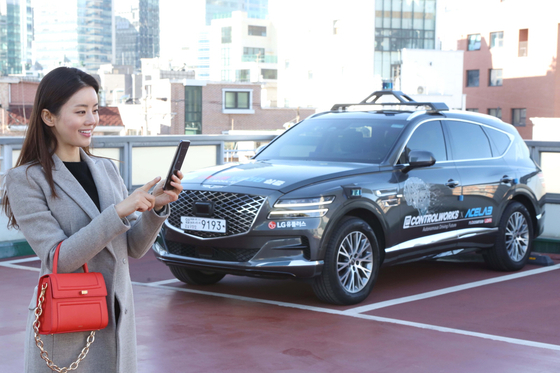 A team of Korean researchers including LG U+ demonstrate a self-driving parking technology at Seoul. [LG U+]


A Korean team has successfully tested an autonomous car driving and parking through real traffic in Sangam-dong, western Seoul.


After 137 test runs, the team demonstrated the technology to local reporters on Thursday in an uncontrolled, real-life setting in Sangam-dong, western Seoul. The vehicle, Hyundai Motors’ Genesis GV80, autonomously drove 800 meters (0.5 miles) through the neighborhood and parked itself in a parking lot nearby. 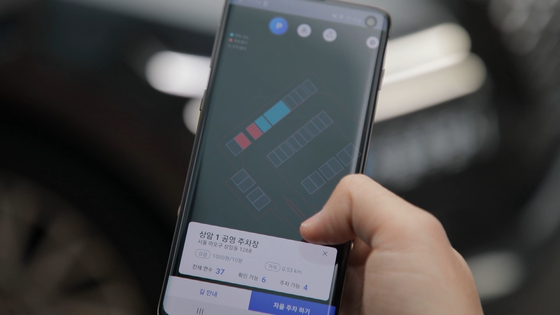 The parking lot and space were designated by the driver using a mobile app, which also provides a real-time location of the self-driving vehicle on a virtual map. Once the car is parked, the mobile app sends a notification saying the delivery was safely done.

Although it wasn’t part of the demonstration, LG U+ said the technology is set for the driver to summon the vehicle out of the parking lot as well. The company explained that the system can save at least 10 minutes that would have been taken looking for a space, parking the vehicle and walking to and from the ultimate destination.

The Hanyang University lab and LG U+ have cooperated on multiple occasions, including demonstrating a 5G-connected autonomous vehicle on Seoul city roads in March 2019.

“Parking is an unavoidable process in the driving experience, and from that perspective, self-driving is the next step of the autonomous driving technology we presented last year,” said Sunwoo Myung-ho, a professor of automotive engineering at Hanyang University and head of the ACE Lab. “It’s like Batman’s Batmobile in real life.”

LG U+’s role was to build a cloud-based central platform that receives live information on traffic signals, roads and parking lots then sends it to the mobile app. High-speed, low-latency 5G connection plays a pivotal role in that process, the carrier says, as driving requires a quick input and processing of information in real time.

For example, if someone else had taken the spot while the self-driving vehicle was heading to that location, the mobile app would notify the user to change destination.

“Communicating with traffic signs, other cars that need to keep a distance and objects on the road are the fundamentals to realize safe, autonomous driving,” said Sunwoo, during a Thursday press conference held online.

“Advanced network technology and the ability to make real-time updates on a virtual map are musts in that task. 3G and 4G LTE had its limits as they create delays. 5G, on the other hand, can complement that shortcoming.”

Controlworks took charge of the sensors on the vehicle and processing visual information to tell whether a parking spot was empty or not, which was later sent to LG U+’s cloud system. ACE Lab verified the algorithms behind the self-driving technology in virtual settings.

Another upgrade made from last year’s self-driving experiment was that this year, the vehicle directly received information from traffic light systems using 5G, instead of perceiving the color of the light.

LG U+ says it plans to develop its role as a data platform provider in the field of autonomous driving, while strengthening partnerships with companies that deal with other aspects of the technology.

“One thing that needs to be done before creating an open lab is the accumulation of data that our partners could use,” said Joo Young-joon, director of LG U+'s convergence technology development unit.

“We plan to build up data for another year or 18 months and take that experience to work with third-party developers, from around 2022.”