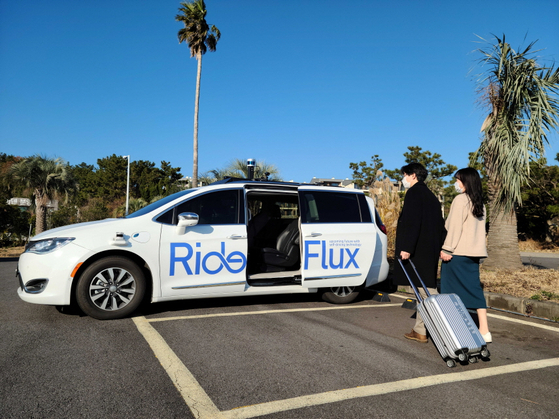 Socar will begin a real-world trial of self-driving minivans on Jeju Island in the first half of 2021, the company said Tuesday.

The project will be conducted in partnership with Jeju's RideFlux, which specializes in self-driving software technology.

In the trial, a Chrysler Pacifica will drive on a 38-kilometer (24-mile) set course from Jeju International Airport to the Jungmun Tourist Complex, located near the island’s Seogwipo area. Customers will be able to call the van via Socar’s mobile app. Up to five people will be able to ride at once.

The service’s fee and the number of minivans operating have not yet been decided, Socar said.

The 38-kilometer route is the longest of six car courses approved by the Ministry of Land, Infrastructure and Transport in November last year for the test operation of self-driving vehicles.

The minivans will still have two company employees, one in the driver's seat and the other in the front passenger seat, as required by law.

For RideFlux, this is not the first time offering transportation to customers using an autonomous vehicle.

In May 2020, the company offered free rides between Jeju International Airport and the Socar ride-sharing station in a Hyundai Ioniq vehicle. The two spots are 5 kilometers apart.

The rides were free of charge. But in exchange, RideFlux was able to obtain vast amounts of data from more than 5,400 rides, equivalent to 500 hours on the road without human interference.

“The goal this year is to expand the service to all of Jeju’s major car roads, which total nearly 400 kilometers, and introduce it in Sejong City,” Socar said in a Tuesday statement.

Socar was one of RideFlux’s first investors, and the three-year-old company is Socar’s only partner in the field of self-driving technology.

On Tuesday, Socar said it would acquire additional shares in RideFlux — its second investment since July 2018. The company declined to disclose its total shareholding.

“Socar and Tada’s capacity in car sharing and ride hailing services, combined with RideFlux’s self-driving software technology, will form the basis of our competitive edge in that market.”