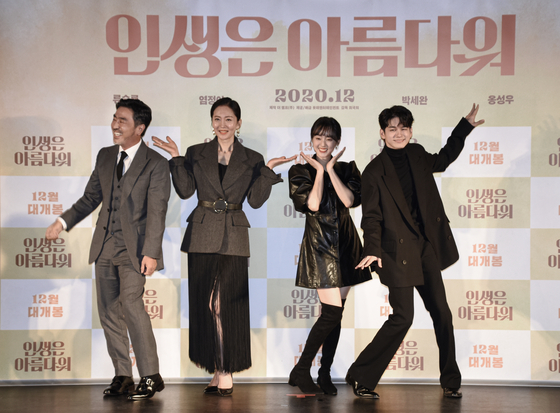 
Thinking about your first love can bring up feelings of nostalgia, with memories of hearts fluttering and innocent feelings.

In upcoming musical film “Life is Beautiful,” when Se-yeon finds out that her days are numbered, she demands her husband Jin-bong help her to locate her first love as her last birthday wish. Jin-bong reluctantly agrees, and the couple is soon on a journey across the countryside with stops in places such as Mokpo, Busan and even Bogil Island, located in Wando County, South Jeolla.

Actors Ryu Seung-ryong and Yum Jung-ah take on the roles of Jin-bong and Se-yeon, while actor Park Se-wan portrays the younger Se-yeon in her teens, and project boy band Wanna One star Ong Seung-wu portrays Se-yeon’s first love, Jung-woo. The actors and director Choi Kook-hee participated in a press event held in Lotte Cinema Konkuk University Entrance branch in eastern Seoul Wednesday, the first offline press event held in many months since the outbreak of the Covid-19 pandemic.

Yum and Ryu introduced their characters and the married couple’s relationship as “real as it can get,” but through the trip the duo finds meaning in their lives and that life certainly is beautiful.

As it’s a musical film, the actors practiced their singing parts and choreography for almost a year ahead of filming. Every song was sung by the actors themselves.

“It wasn’t really physically exhausting, but I was frustrated,” Yum said. “When I couldn’t get the lyrics right, or got my steps mixed up, I kept [wistfully] thinking that ‘what if’ I was a just few years younger and I was more physically fit [for the role].”

Ong, a singer-turned-actor, on the other hand, had no trouble adapting to the musical film.

“I just really enjoyed being part of this film,” Ong said. “The songs were very catchy and lovely.”

It remains to be seen if Ryu, an actor with a record of four films whose box office sales surpassed 10 million tickets—“Masquerade” (2012), “Miracle in Cell No. 7” (2013), “Roaring Currents” (2014) and recently, “Extreme Job” (2019) —can repeat his success and lure local audiences to the still-empty cinemas slammed by the pandemic.

“If ‘Extreme Job’ humorously portrayed the meaning of love and justice in the workplace, ‘Life is Beautiful’ paints an overall picture of this couple’s life through the songs, and has the audience reminisce on their own pasts and sympathize,” Ryu said.

Director Cho also said the audience will enjoy listening to the retro songs from famed musicians Lee Moon-se, Lee Seung-cheol, Lee Juck and Toy that dominated the eras from the '70s to early 2000s.

“There were many iconic songs from that period, but I tried to single out those that correlated the best with Se-yeon and Jin-bong’s storyline,” Choi said.