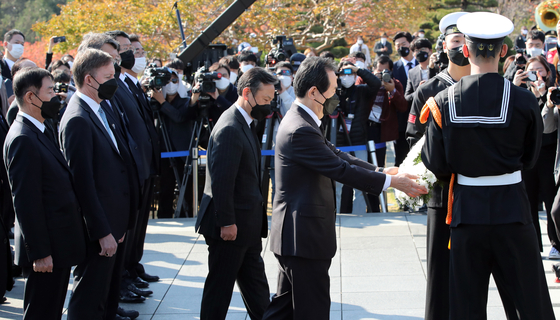 Prime Minister Chung Sye-kyun lays a wreath at the UN Memorial Cemetery in Busan on Wednesday during the Turn Toward Busan ceremony. Envoys from 22 countries that sent troops to aid South Korea in the war, or medical personnel, stand behind Chung to pay their tribute to the fallen soldiers in the cemetery. [SONG BONG-GEUN]


BUSAN — South Korea honored the United Nations (UN) troops that fought on its behalf in the 1950-53 Korean War during a ceremony in Busan commemorating the first official International Memorial Day for UN Veterans on Wednesday.

At exactly 11:00 a.m. on Nov. 11, a silence fell over the UN Memorial Cemetery in Busan as hundreds of dignitaries, soldiers and others bowed their heads in honor of the fallen UN troops buried on those grounds.

The stillness was soon broken by the sound of jets roaring across the sky above the cemetery, leaving in their wakes perfectly aligned trails of white smoke that together spelled out the symbolic numbers: 11.11.11.

The flyover was carried out by the Korean Air Force’s aerobatics team known as the Black Eagles, and a subsequent 21-gun salute opened the day’s ceremony. It was attended by around 150 veterans, representatives and active-duty service people from 22 UN Sending States in attendance.

Turn Toward Busan, as the ceremony is called, has been held every year at the UN Memorial Cemetery in Busan since 2007. It was first conceived by Vincent Courtenay, a Canadian veteran of the Korean War, who proposed commemorating UN participation in the war on Nov. 11 — which many Western nations celebrate as Armistice Day, or the end of World War I.

In 2014, the annual ceremony was upgraded to an international event with envoys participating from the 22 UN countries that sent troops or medical personnel to aid South Korea in the war.

This year’s ceremony, however, carried special significance, falling on the 70th anniversary of the outbreak of the Korean War on June 25, 1950.

South Korean Prime Minister Chung Sye-kyun and Minister of Patriots and Veterans Park Sam-duck led the day’s rituals, laying wreaths at the graves of some of the roughly 2,300 UN troops buried at the cemetery — the world's only burial ground dedicated solely to UN combatants.

The main event, which included musical performances by descendants of Korean War veterans, took place in front of the Wall of Remembrance, a memorial made up of 140 marble panels on which the names of 40,896 UN soldiers who died or went missing in the war are inscribed.

In his address at the ceremony, Chung vowed South Korea would prove the value of UN troops’ sacrifices, by honoring veterans and the family members left behind, and by demonstrating Seoul’s leadership in global initiatives like combating climate change and the coronavirus pandemic.

Allowing a permanent peace to take shape on the Korean Peninsula would be “the greatest way to repay the sacrifices and dedication of the UN veterans,” Chung said.

“We will ceaselessly pursue dialogue on a peace regime, and do what we can gradually toward finding a new path toward peace,” the prime minister added. 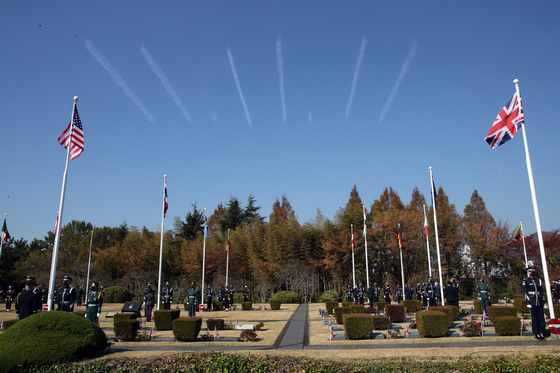 
President Moon Jae-in also paid his respects at the occasion, through a statement delivered to reporters on Wednesday.

“The more we reflect on their spirit of dignity, the more we are humbled by their solemn sacrifice,” Moon wrote. “I pay tribute to those who dedicated themselves to freedom and peace, and pray for the souls of those who sacrificed their own lives.”

According to the Veterans Ministry, the minute of silence at Turn Toward Busan was simultaneously observed in 12 other countries including the United States.

While Seoul hoped to fly in hundreds of surviving veterans to mark the occasion this year, the Covid-19 pandemic forced the government to scale down the ceremony significantly. Among the 150 people in attendance Wednesday were several descendants of Korean War veterans who underwent two-week quarantines to take part in the ceremony.

The United Nations Command provided support for the South during the three-year war on the Korean Peninsula, which ended with an armistice agreement on July 27, 1953.

Over 1.95 million soldiers from around the world supported South Korea during the war. Among them, 37,902 were killed and 103,460 wounded, according to the Veterans Ministry.

To honor the sacrifices that the 22 sending states made during the bloody conflict, South Korea donated around one million face masks this year with the directive that they be given to surviving veterans.

On Tuesday, ahead of the Turn Toward Busan ceremony, the South Korean government also hosted an international conference on veterans’ issues with representatives of the UN Sending States, producing a joint communique that reaffirmed cooperative ties among the countries. 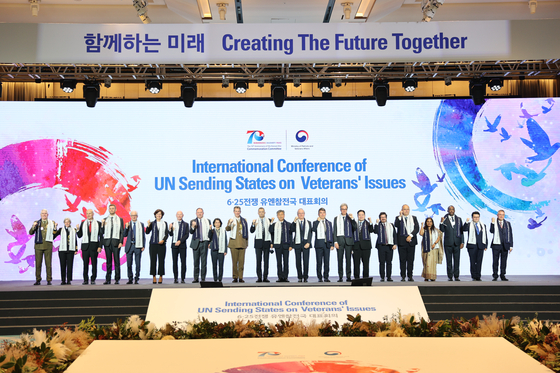 Envoys from 22 UN Sending States pose for a group photo on the stage after they adopt a joint communique that reaffirmed cooperative ties among the countries at an international conference on veterans’ issues held in Signiel Hotel in Busan on Tuesday, ahead of the Turn Toward Busan ceremony. [NEWS1]