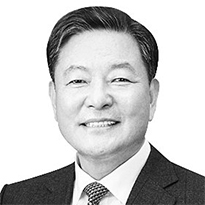 The author, former Navy chief of staff, is the minister of patriots and veterans affairs.


The government annually holds a memorial ceremony at the United Nations Memorial Cemetery in Korea (Unmck) in Busan at 11 a.m. Nov. 11 every year to commemorate fallen UN soldiers who fought during the Korean War. The commemoration, first proposed in 2007 by a Canadian veteran, is titled “Turn Toward Busan.”

It is a one-minute observation of silence with the world turning toward the cemetery.

The Unmck, located in Nam District of Busan, is the world’s one and only UN cemetery, where 2,311 soldiers from 11 countries, including the United States, Australia, Canada, Turkey and Britain, rest in peace. After the UN Command created the cemetery in January 1951, the National Assembly offered the land to the UN permanently.

The memorial cemetery has long served as a memorial — rather than a cemetery — but its role as a burial ground revived a few years ago after the Ministry of Patriots and Veterans Affairs (MPVA) invited Korean War veterans from around the world to the country.

Many aged veterans who visited the Unmck made requests and left wills that they want to be buried in the land they had defended with their lives when they were young and that they want to rest in peace next to their fellow soldiers. The Commission for the United Nations Memorial Cemetery in Korea (Cunmck) accepted their wishes shortly.

After the late French veteran Raymond Bernard was buried at the Unmck in May 2015, 12 more veterans were buried. This year’s memorial event is the first case in which the three British veteran remains recovered in Korea are to be buried the cemetery. It is sad that they will be buried as “unknown soldiers” as their remains were unidentified despite years of efforts. 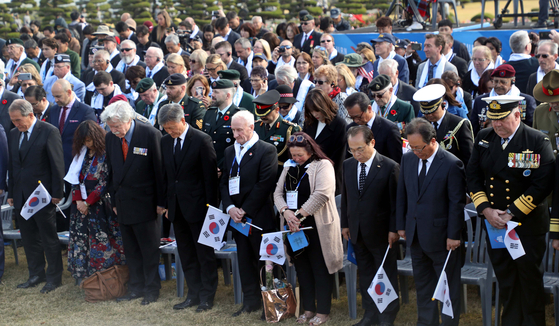 Participants in the “Turn Toward Busan” event held at the United Nations Memorial Cemetery at 11am, November 11, 2019 pay tribute to UN soldiers fallen during the Korean War. [SONG BONG-GEUN]

The Unmck is not just a cemetery but the world’s only UN cemetery and a symbol of international society’s solidarity, cooperation and peace of the Korean Peninsula and the world. Heroes buried there had sacrificed the brightest time of lives to defend the Republic of Korea, returned to their homeland, and decided to be buried in Korea after their deaths alongside their fallen soldiers to become the guardians of Korea’s peace for the second time. In that sense, the Unmck plays the role as a buffer zone aimed at preventing another war on the peninsula.

Many Koreans probably do not know about the Unmck. But we must remember that our peace, freedom and prosperity were — and are still — possible thanks to the unflinching courage and sacrifice of our soldiers and 1.95 million Korean War veterans from 22 countries.

It is natural that we repay their sacrifices. In addition to holding the Korean War Veterans Day events, the MPVA has been re-inviting the veterans and their families to Korea to attend appreciation events here and in their homeland. The ministry also held various campaigns such as offering facemasks to the veterans and their families after the Covid-19 pandemic started.

The government also operated peace camps and scholarship programs for the descendants of the veterans in order to remember the pain of the war and to promote peace. The campaign to support those veterans constitutes Korea’s unique asset for public diplomacy. It serves a crucial role to improve communication and cooperation with 22 countries that fought as our blood allies.

The UN-allied countries and Korean War veterans helped our country during the crisis of war. Let us participate in the Turn Toward Busan event to pay silence for one minute at 11 a.m. on Nov. 11 to pay our deep appreciation and respect.