Lawmaker apologizes after telling minister to 'beg' for budget item

Lawmaker apologizes after telling minister to 'beg' for budget item 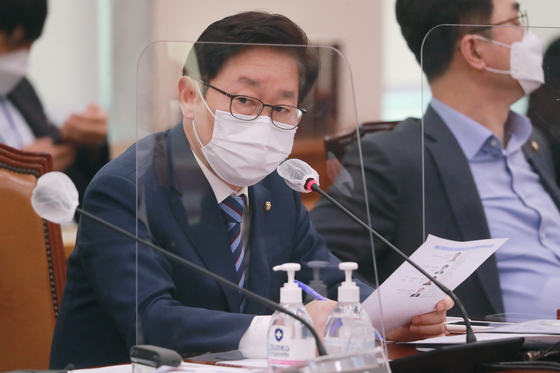 In this file photo, Rep. Park Beom-kye of the ruling Democratic Party speaks during the Legislation and Judiciary Committee's audit of the Justice Ministry, Supreme Court, Constitutional Court, Board of Audit and Inspection and the Ministry of National Court Administration on Oct. 26, 2020. [YONHAP]


Rep. Park Beom-kye of the ruling party on Wednesday issued an apology for humiliating the minister of National Court Administration by forcing him to beg for the budget.

“I repent for my fault,” Park, a three-term lawmaker from the Democratic Party (DP), wrote in a Facebook message. “I got too carried away.”

Park was fiercely criticized for his remarks during the National Assembly’s Legislation and Judiciary Committee session last week.

According to Park, the ministry has been receiving 30 million won ($27,000) every year for the project. This year, the ministry requested a larger budget of 150 million won, but the Finance Ministry slashed the line item entirely.

Deploring the situation, Park, a former judge, told Cho that he must express more desperation to the lawmakers to win the budget.

“I hope the National Assembly will pay attention to this matter,” said Cho, an incumbent Supreme Court justice who has led the Ministry of National Court Administration since January 2019.

Cho tried to explain the importance of the project, and Park responded, “This can easily be resolved if you just say one word to beg for help. It is frustrating that you are not doing it.”

Following their dialogue, Park faced fierce criticism for humiliating Cho, and was accused of abusing his power to decide the budget as a lawmaker. He issued a press release later that day and said he went too far because he, as a former judge, felt frustrated that the judiciary was not given the funding.

Lawmakers ultimately offered to restore the 30 million won to the Ministry of National Court Administration's budget, but an opposition lawmaker said Tuesday that the ministry turned it down.

“During the budget subcommittee of the Legislation and Judiciary Committee meeting, we discussed the project,” Rep. Cho Su-jin of the People Power Party said. “The ministry refused the budget.”

The ministry said it would explain its position to Park separately, Rep. Cho said.

“The budget is the people’s tax money. It is not Park’s money,” she said, criticizing Park’s attitude. “I wonder what he thinks about this conclusion.”