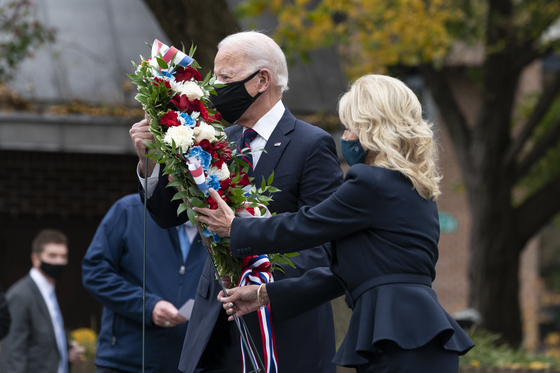 “We reaffirmed our firm commitment to a robust ROK-US alliance and peaceful and prosperous Korean Peninsula,” Moon wrote in the English-language message. ROK stands for Korea’s formal name, the Republic of Korea.

“Going forward, I will work closely with him to meet global challenges including COVID19 and climate change.”

According to the Blue House, Moon was joined by the director and deputy directors of the National Security Office when he had the phone talk, which started at 9 a.m.. Other presidential aides including spokesman and foreign affairs secretary also listened in from a separate room.

The phone conversation followed Biden’s visit to a Korean War veterans’ memorial on Wednesday. Biden and his wife, Dr. Jill Biden, visited the memorial in his home state of Pennsylvania as the country observed Veterans Day. It was Biden’s first official event since his election victory.

"Biden, holding the hand of his wife, Dr. Jill Biden, and accompanied by the Mayor of Philadelphia, Jim Kenney, arrived at the black marble memorial that stands in a square. U.S. and Korean flags flew overhead," a pool report said.

During the 15-minute visit, Biden laid three wreaths at the memorial, according to the report.