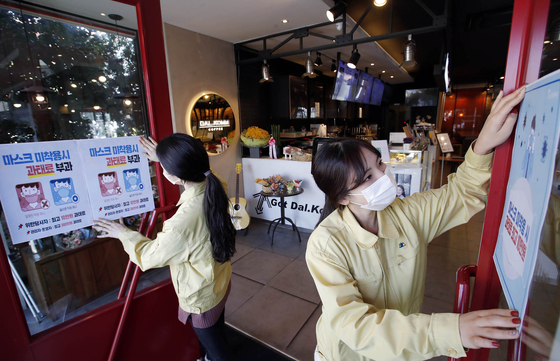 Gwangju health officials post fliers in a coffee shop Thursday informing the public they could face penalties for not wearing masks in public. [YONHAP]

A government-led experts meeting discussing Covid-19 vaccine procurement is set to be held Thursday evening as Korean health authorities race to secure tens of millions of doses from abroad as soon as distribution is green-lighted.

Yoon Tae-ho, an official from the Central Disaster Management Headquarters, said in a press briefing Thursday that it was the first time the government was hosting a meeting of the coronavirus advisory committee, and that participants were planning to talk about specific ways to get vaccines after they are approved.

Yoon continued that the advisory committee was already in talks with various vaccine developers and that Thursday’s meaning was meant for the government to review options to safely distribute vaccines to the Korean public.

Yoon didn’t announce when or where the behind-closed-doors meeting was taking place, but Yonhap News Agency, without citing any sources, said the rendezvous was scheduled in Seoul with about 20 vaccine-related experts.

Yoon said in the Thursday press briefing that talks with Pfizer were also going “smoothly,” but stressed it was too early to tell when a deal could be signed with the American pharmaceutical company.

The advisory committee meeting comes two days after Pfizer and its German partner BioNTech reported early data showing its coronavirus vaccine was more than 90 percent effective in preventing the disease, a major milestone in the global quest to stop the pandemic.

Korea added 143 more infections of the virus Wednesday, slightly fewer than the day before when 146 infections were counted. Wednesday was the sixth day in a row that daily new cases were in the triple digits. 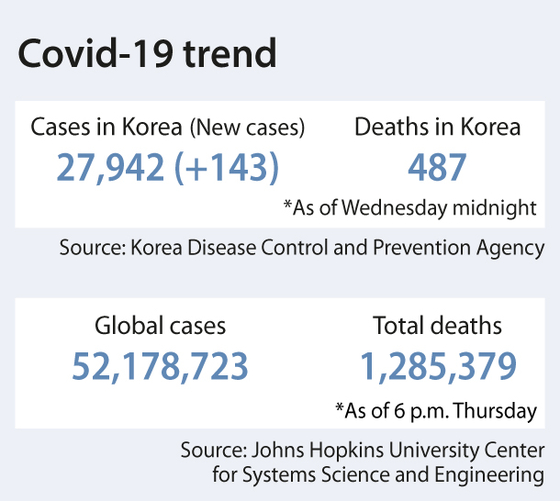 Of that number, 128 were local infections: 52 in Seoul, 34 in Gyeonggi, nine in North Chungcheong, eight in South Jeolla, six each in Gwangju and Gangwon, three in South Gyeongsang, two each in Busan, Daegu, Incheon and Daejeon and one each in North Jeolla and Jeju Island.

Fifteen were imported cases: three from Egypt, two each from Russia and Myanmar as well as one each from Uzbekistan, Nepal, Japan, Italy, Croatia, the United States, Kenya and Australia.

No patients died Wednesday, leaving total deaths at 487, while 138 patients recovered, raising total recoveries to 25,404. As of Wednesday at midnight, Korea had counted 27,942 coronavirus patients in all.

Starting Friday, anyone who doesn’t wear a face mask in indoor public spaces — subways, buses, trains, restaurants, cafes, bars, clubs, movie theaters, funerals, wedding halls, supermarkets, arcades, gyms and more — will be fined with 100,000 won ($90), according to a revised section of the Infectious Disease Control and Prevention Act. Operators of those facilities can face penalties up to 3 million won.

Under the law, people are allowed to wear so-called dental masks, surgical masks, hygienic masks, disposable masks and cloth masks, but scarves pulled across one’s face or masks made out of net fabric can be penalized.

Children under the age of 14 and people with disabilities who may have difficulty wearing masks won’t face penalties, nor will people who briefly take off their masks while eating, washing, swimming, performing a medical procedure, taking a photo or holding some sort of an entertainment show, health officials said.

Those who are being filmed for a TV program or have difficulty breathing after some kind of a surgery also won’t be penalized, nor will an athlete who’s playing a match, a sign language interpreter, or brides, grooms and their parents during weddings.

Places in which people can face penalties if they don’t wear a face mask will increase as the social distancing level goes up.

That goes for outdoor sports arenas in Level 1.5; all indoor facilities including private companies, as well as any outdoor activities that are deemed “high-risk” in Level 2; and all outdoor activities where people can’t keep a distance of at least 2 meters (6 feet) from each other in Level 2.5 and Level 3.

Each local government office will send teams of officials to comb through their respective areas to track down violators.

The Seoul Metropolitan Government stressed Thursday that the goal was to form a social consensus around mask-wearing, not penalize people, which is why officials will first give out warnings and then press penalties if people obstinately refuse to wear masks.

Who will help if another mask crisis occurs?