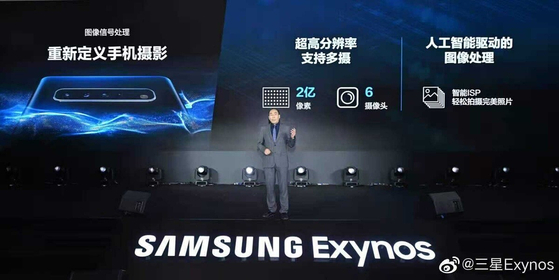 The initial order came from Dongguan, Guangdong-based Vivo, as its upcoming X60 will come equipped with the new processor next year, according to Pan Xuebao, executive director of Samsung Electronics' China Semiconductor Research Institute.

Built upon the existing 5-nanometer extreme ultraviolet (EUV) lithography process, the Exynos 1080 demonstrates up to a 50 percent increase in single-core performance and a 100 percent improvement in multi-core performance when competing against its predecessor Exynos 990, according to Pan during a press event Thursday.

With the enhancement in data processing capability, the chipset is 25 percent smaller and 20 percent more power efficient.

Previous mobile application processors were based on a 7-nanometer node, which consumes more power.

The key enabler of such performance is a set of central processing units manufactured by British semiconductor company ARM — Cortex-A78 cores and Cortex-A55 cores.

It also includes a 5G modem, which is compatible with both types of 5G networks, mmWave and Sub-6 gigahertz.

The modem enables downlink speeds of up to 5.1 gigabytes per second on the 6 gigahertz range of spectrum.

To handle data-intensive applications, the newest Exynos is fitted with a powerful neural processing unit and digital signal processor, allowing for up to 5.7 trillion operations per second.

As for camera functions, it can support resolutions up to 200 megapixels and up to six individual camera sensors.