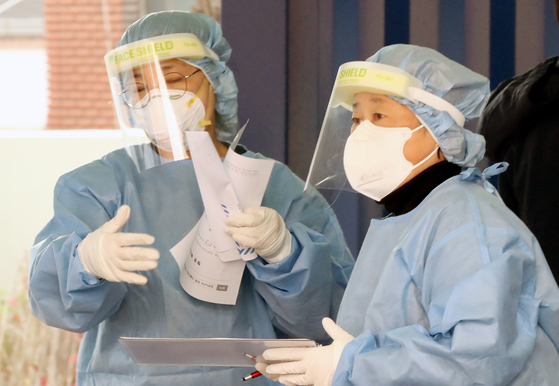 Medical personnel at a testing center in Seosan, South Chungcheong, on Friday, where a group of Air Force officers have tested positive, giving way to one of many clusters rising sporadically throughout the nation. [NEWS1]

New cases of Covid-19 in Korea neared 200 Thursday for the first time in two months.

The Korea Disease Control and Prevention Agency (KDCA) said that Korea saw a total of 191 new cases on Thursday, of which 162 were domestic and 29 imported.

The KDCA said that the emerging clusters were not restricted to definable communities such as nursing homes or churches, like a lot of the former clusters.

The daily counts of Covid-19 infections remained in the double digits for most of October until late in the month when they passed the threshold of 100 due to clusters in nursing homes.

The last time the daily counts were close to 200 was on Sept. 4, when Korea was seeing a wave of infections from a National Liberation Day rally in Gwanghwamun Square in the middle of August.

Soldiers were among the newly infected. Three senior-ranking soldiers at Army bases in Gyeonggi and eight officers at an Air Force base in Seosan, South Chungcheong, tested positive, the Ministry of National Defense announced Friday.

One senior-ranking soldier at a base in Anyang, Gyeonggi tested positive after meeting with a civilian during a holiday on Nov. 1, who later tested positive.


Two other senior-ranking soldiers at a base in Yangju, Gyeonggi were infected after one of them attended a family funeral.

While wearing a mask on public transport, at protests and rallies or during visits to nursing homes has been required by law since Oct. 13. Friday was the first day that violators of the law were subject to a penalty of up to 100,000 won ($89.60).

Under the law, people are allowed to wear so-called dental masks, surgical masks, hygienic masks, disposable masks and cloth masks, but wearing scarves pulled across one's face or masks made out of net fabric can face penalties.

Children under the age 14 and people with disabilities who may have difficulty wearing masks won’t face penalties, nor will people who briefly take off their masks while eating, washing, swimming, performing a medical procedure, taking a photo or holding some sort of an entertainment show, health officials said.

The Seoul city government announced Friday that it began random rounds of inspections. In addition to public transport and nursing homes, the city government added a number of high-risk businesses such as noraebang (booth-type singing room), bars that involve dancing, internet cafes, movie theaters, funerals and cram schools with more than 300 students to the list of locations where people are required to wear masks.

Quarantines being dropped for people coming to Korea

A long way to go before normal