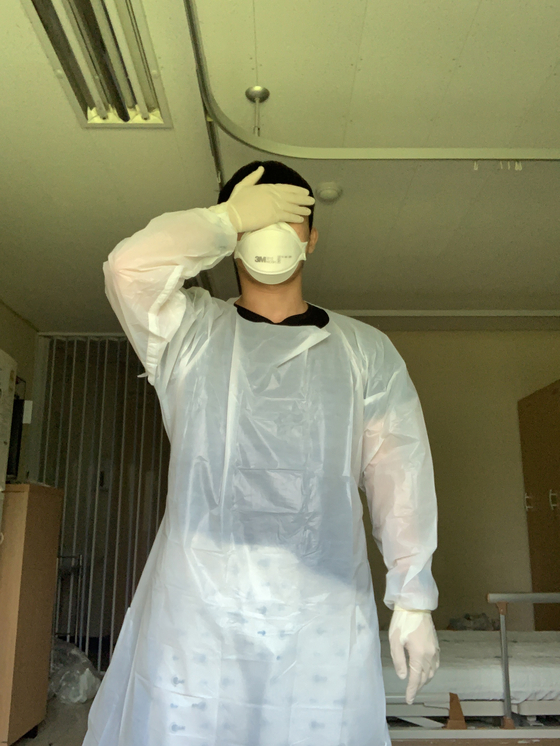 A picture that Kim ji-ho took of himself while he was under quarantine at the National Medical Center in central Seoul for 50 days. [KIM JI-HO] 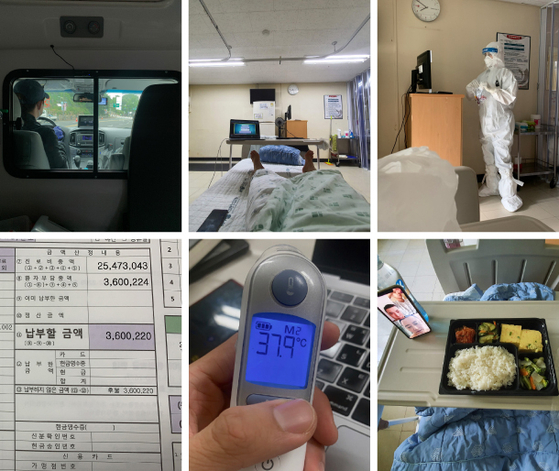 Photos taken by Kim Ji-ho when he was in quarantine. [KIM JI-HO]

Kim Ji-ho published a book based on his ordeal

He contracted the virus after coming into contact with a friend who tested positive while hosting a dinner to thank his friends for paying their condolences at his grandmother’s funeral, when social distancing guidelines were relaxed.

He was officially diagnosed with Covid-19 on May 9 and was put under quarantine at the National Medical Center in central Seoul for 50 days after repeatedly testing positive.

From the middle of his quarantine, Kim, partly out of boredom and partly to spread information, began to meticulously write about his quarantine process on a blog: From how he was infected to what kind of procedures he went through until he entered the medical facility and what it was like in the hospital.


His quarantine diaries became a hit, reaching more than 10,000 views per day at its peak. He later decided to turn his blog entries into a book “I GOT COVID-19,” which was published last month. In the book, Kim narrates how he felt after first learning that he had tested positive, how he spent his days, his feelings when he first heard that he’d tested positive, his quarantine days and also how his life changed after he was released from the hospital.


“What I heard the most from others around me was ‘you should have been more careful,’” Kim said in a recent interview with the Korea JoongAng Daily at a cafe in Gangnam district, southern Seoul. “And what almost automatically followed was ‘so have you tested negative? Are there any risks for reinfection?’ [These two] were like a set menu.” 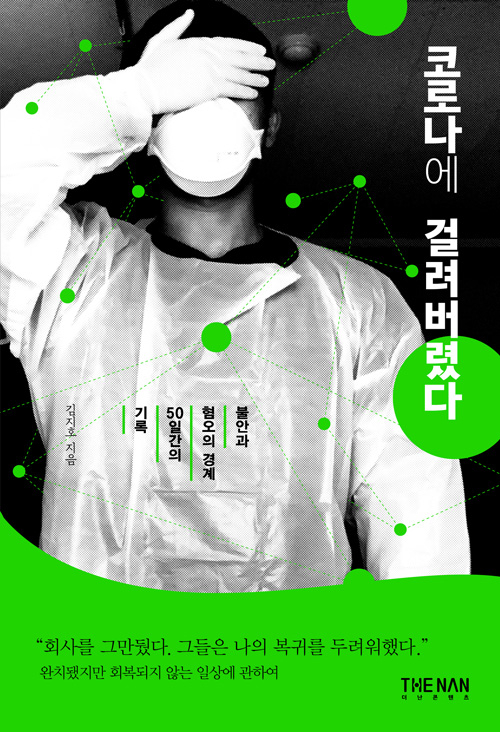 A book written by Kim Ji-ho which closely follows through from the moment he first felt the symptoms of Covid-19 to how his life was impacted due to the virus. [KIM JI-HO]

How is your life different after testing positive for Covid-19?


I think the way I perceive people, the way I look at them has changed. I used to see only the surface, but now I try to look at them from all sides. People’s perception of me has changed as well, and [due to Covid-19] I’ve become a writer.
But thankfully I didn’t have any physical traumas or aftereffects from the virus, and I think the majority of the patients feel the same way. My Australian friend who was infected with the virus in Korea is [still] very healthy, and I heard from his friend who was also infected that it had intensified into pneumonia, but now he’s fine.
I think everyone’s talking about the aftereffects because that’s what’s provocative. Most of us are treated as if we have a minor ailment but those serious cases receive the most spotlight. I don’t have any aftereffects, but nobody talks about this, so I thought I should be the one to say it out loud.

What have people’s responses been when you told them you had the virus?


The first thing they said was that it was all my fault, especially those online. All the comments criticize me for hosting the dinner, but the social distancing level had been eased during that time and I did what I had to do [to thank my friends who came to the funeral]. But the comments blame me for not being careful enough.
[Offline] it has been pretty similar. I first thought they were being considerate, but after a while I began to feel that what they were saying were things that they were telling themselves to quell their own worries, like when they told me I should have washed or sanitized my hands more often. [As I wrote in the book] I was always careful to prevent myself from being infected, but it just happened. I was simply unlucky. (Out of the six people in attendance at the dinner, only Kim was infected.)

How was your quarantine at the hospital?


It was very lonely [and frustrating]. The space agitated me. I could see the door, but I couldn’t get out. I could see outside through the windows but I couldn’t open them because they’d been sealed shut. And when the quarantine went over three weeks, loneliness and agony struck me simultaneously.
[From then] I couldn’t watch Netflix anymore because my eyes hurt, and if I laid down any longer I thought I would get bedsores. I couldn’t exercise because there was no air conditioner and I didn't have proper clothes either. The only way I persevered was through calling up my friends and family, and when that began to fail I started to write. 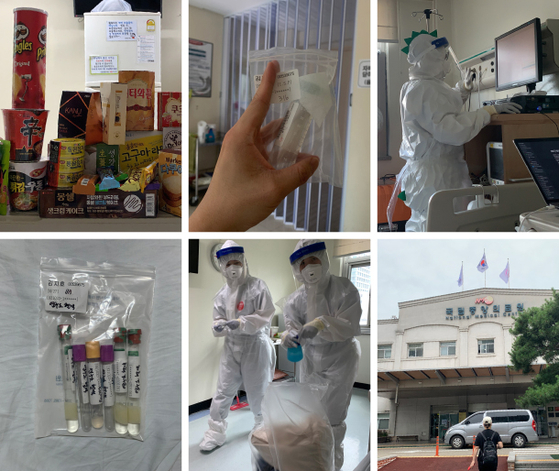 Photos taken by Kim Ji-ho when he was in quarantine. [KIM JI-HO]

Why did you decide to publish a book?


When I thought about why others ostracize the sick and the questions people asked me over and over again — why I covered my face with my hat when I got in the ambulance to go into quarantine and why I couldn’t easily admit to people that I was sick — I thought that people’s anxiety derived from a lack of knowledge. [At least] for me, when I think about when I’m scared, it’s when I face something unknown, new.
So I thought it could lessen people’s unease when someone looks for information and it’s there. I organized what I went through in a timeline and if I didn’t specifically mention the exact dates, so people who come across my blog could see my writing as the knowledge they need right now. So I began to read through all the legal and social policies and institutions that I received or experienced so that anyone can utilize my information.


A particularly interesting part of your book was when you wrote that there needs to be guidelines for patients who recover from Covid-19 and are trying to go back to their normal lives.


When I searched through all the guidelines almost all of them were for the masses who haven’t gotten the virus. In other words, they were about preventive measures to not become infected. But from the moment the patients leave the hospital, there are no guidelines about them, not just in Korea, but all over the world. I think this is a serious problem. All of the some 23,000 recovered patients have tackled people’s [fears] head-on and I wondered why there weren’t any measures taken by the country to alleviate or change people’s perceptions, when they quarantined the people in the first place.

What was the hardest part of adapting to life after Covid-19?


The comments that follow after articles about me. I mean, it doesn’t really hurt me, but it makes me realize that I’m living in a society with people without even an ounce of altruism and that is disillusioning.
If such comments were pointed at my younger brother, my parents or my friends, I think it would have shaken me. They make all of these assumptions about me even when they haven’t been in my shoes or don’t know me. And I believe that there’s no reason why that one day those fingers can be pointed back at themselves.
In the other press interview I did, one of the striking questions was “what do you think are the chances of people getting Covid-19?” and I answered “100 percent.” From my experience, I learned that this virus is completely random.
I want to say the same about all the [malicious] comments. It’s completely plausible or possible to say that my story will one day become yours.
That’s why I wrote this book: For someone behind a keyboard in case they are infected with the virus, or their family is, to provide information for them.

What do you think is the reason behind people’s fear?


I think it comes from ignorance, lack of information or believing the wrong information. If I fear or detest someone, it means that others can also feel the same about me. This mutual resentment can only end when I end it, and that’s when I can expect others to feel the same toward me.
And I think when you don’t know enough and you feel insecure, you need to make an effort to penetrate through the fog. For me that was through looking up information. I kept asking myself questions and looked up those answers, until I accumulated enough knowledge to publish this book, and my contempt for others is now gone. I believe that when we’re at the crossroads between anxiety and loathing, we need to first be understanding, and acquire enough information, learn from it, and put it into action.

Restrictions on Covid patients start to loosen up

Comedian Jo Se-ho recovers from Covid, gets back to business