Korea’s Kospi index surpassed 2,500 Monday for the first time in nearly two and a half years on hope of economic recovery tied to a recent breakthrough in vaccine development.

Foreign investors’ purchases were largely concentrated on Korean chipmakers as the industry is expecting a boom next year. 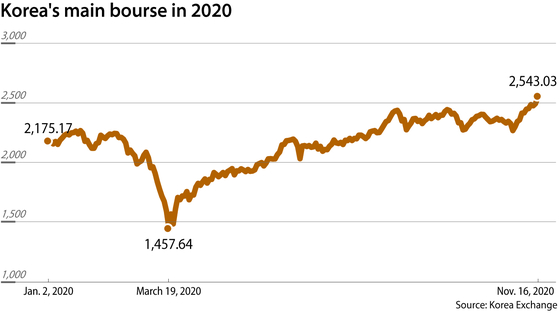 "Foreign investors have net purchased approximately 3 trillion won in the past month, but on a yearly basis they still net sold 23 trillion won," said Seo Jung-hun, an analyst from Samsung Securities. "Just recovering that amount of foreign capital in the Korean market will guarantee sizable liquidity."

Seo added that a weak dollar against the Korean won was tied to the U.S. election victory of Joe Biden, who is apparently going for an easy-money policy that will attract more foreign investors seeking foreign-exchange profits.

The local currency closed at 1,109.3 won against the greenback, 6.3 won up from the previous trading day. It is the first time in 23 months for the rate to close under 1,110 won level.

Local analysts anticipate a further rally in the market throughout the year.

"On the back of foreign investors' buying spree, the Kospi could reach its all-time high within this year," said Choi Yoo-june, an analyst from Shinhan Investment.

Brokerage houses are expecting the index to surpass the 2,700-mark next year. Samsung Securities estimated the index between 2,100 and 2,850 while Meritz Securities set out a range between 2,250 and 2,800. Hana Investment estimated the figure to reach 2,750 at the highest.