Interest rate ceiling to be lowered to 20% next year

Interest rate ceiling to be lowered to 20% next year 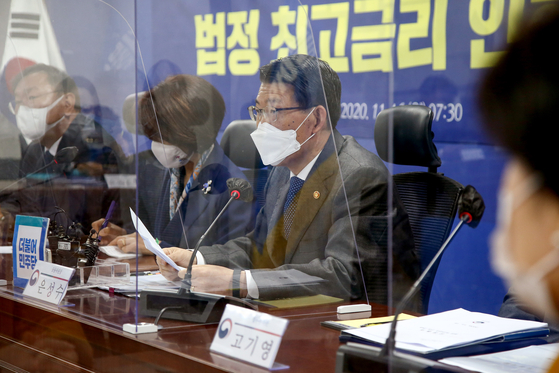 The government and ruling party agreed to lower the legal ceiling on interest rates for loans to help small businesses further.

According to the Financial Services Commission (FSC) on Monday, the ceiling will be lowered from the current annual interest rate of 24 percent to 20 percent.

The change is expected be applied in the second half of 2021, though the Democratic Party (DP) said it could move up the date if necessary.

It is the first change since the legal ceiling was lowered from 27.9 percent in 2018.

The FSC estimated that many people who borrowed money at interest rates over 20 percent will benefit from the change.

According to the FSC, as of March this year, there are 2.39 million people who have loans with annual interest rates exceeding 20 percent.

These are largely people who have borrowed from non-banking financial companies with higher interest rates including loan sharks and so-called savings banks, which are like consumer finance companies in other countries.

They are expected to save 483 billion won annually in interest payments with the lowering of the ceiling.

The remaining 13 percent, or 316,000 lenders, will not get much benefit because their debt will mature in the next three to four years. They have outstanding loans of 2 trillion won.

The FSC said it decided to lower the interest rate ceiling because the coronavirus pandemic has become extensive and could lead to borrowers missing payments.

During a meeting of figures from the government and ruling party, DP floor leader Kim Tae-nyeon said lowering the interest rate is necessary considering the difficulties many small businesses face.

“In a time of low interest rates, keeping the maximum ceiling on loan interest at 24 percent is outdated,” Kim said.

To battle the global pandemic, the Bank of Korea in May shaved off 0.25 percentage points on its policy rate to bring it to a historic low of 0.5 percent.

“We need to lower the maximum interest rate to ease the burden of interest payments on [lower-income] people,” floor leader Kim said.

He noted the possibility of people resorting to illegal loan sharks with higher interest rates as financial companies tighten their standards for loans, shrinking borrowing opportunities for people with low credit scores.

Lowering the ceiling on loan interest rates was a promise made by President Moon during his presidential campaign.
Gyeonggi Gov. Lee Jae-myung, who is also a possible DP presidential candidate, has been more aggressive. In August he proposed lowering the interest ceiling to 10 percent.