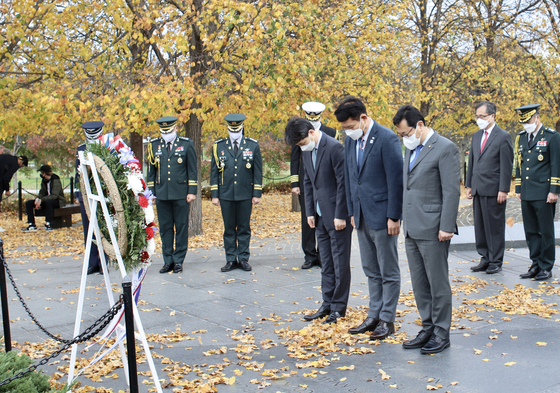 Democratic Party Rep. Song Young-gil, center, and members of the party’s Korean Peninsula task force pay respect at the Korean War Memorial in Washington Sunday as they kick off their six-day trip to the United States. [DEMOCRATIC PARTY]


A delegation of lawmakers from South Korea’s ruling Democratic Party (DP) on Sunday kicked off a six-day trip to Washington aimed at diplomacy to encourage the incoming Joe Biden administration to prioritize policy toward enabling a peaceful Korean Peninsula.

Rep. Song Young-gil, a five-term DP lawmaker, led the delegation, which is part of a task force on Korean Peninsula issues. They planned to meet with U.S. Deputy Secretary of State Stephen Biegun, members of Congress and President-elect Joe Biden’s allies.

The DP delegation is especially focused on preventing both a reversal of recent progress made toward denuclearization negotiations with North Korea, and a return to the Barack Obama administration’s "strategic patience" approach toward Pyongyang.

Instead, they hope to encourage the incoming Biden team to set an agenda for continuing efforts toward denuclearization and establishing peace on the Korean Peninsula early in the administration.

“We will try hard so that President Moon Jae-in’s Korean Peninsula peace policy will be accepted by the Biden administration and to raise our mutual understanding," Song told reporters at Incheon International Airport Sunday. “The first 100 days are important. This U.S. trip is very much about pre-emptive diplomacy.”

The task force, also including Reps. Kim Han-jung and Youn Kun-young, plans to meet with Rep. Brad Sherman of California, the top Democrat on the House Foreign Affairs Subcommittee on Asia, and Democratic Rep. Thomas Suozzi of New York to discuss the North Korean nuclear issue and the Korea-U.S. alliance.

They were not expected to meet with Biden or his transition team, but instead with experts at think tanks and allies of Biden who are indirectly linked to his campaign.

Song said he plans to discuss a resolution calling for a formal end of the Korean War that has been introduced in the U.S. House of Representatives and has so far won the support of 52 members of the chamber.

The 1950-53 Korean War ended in a ceasefire, and President Moon Jae-in has stressed the need for an official end-of-war declaration.

This House resolution “calls for the conclusion of a binding peace agreement constituting a formal and final end to the state of war between North Korea, South Korea, and the United States.”

The Korean lawmakers honored war veterans at the Korean War Memorial in Washington Sunday as their first official schedule, Song shared on his Facebook account Monday. He called the site “symbolic of the Korea-U.S. alliance, which shares values on democracy, free market economy, human rights and rule of law.”

He also noted that a House resolution reaffirming the importance of the Korea-U.S. alliance is scheduled for a vote in the House on Wednesday.

The resolution, introduced last year by Rep. Suozzi, calls for the conclusion of a “mutually agreeable, multi-year” bilateral Special Measures Agreement (SMA) to decide contributions for the stationing of some 28,500 U.S. troops in Korea. The previous SMA expired at the end of last year, but the two sides have struggled to reach a new deal as the Donald Trump administration has demanded that Seoul pay drastically more than previous years.

Song wrote on Facebook that the resolution coming up for a vote shortly after the U.S. presidential election “signifies that the Korea-U.S. alliance is that important.”

He expressed expectations that if the resolution is passed, “it could have a not insignificant impact on the Biden administration as it sets its foreign affairs agenda when it launches next January.”

He added, “The government and party are one in taking a very pre-emptive and active diplomatic strategy.”