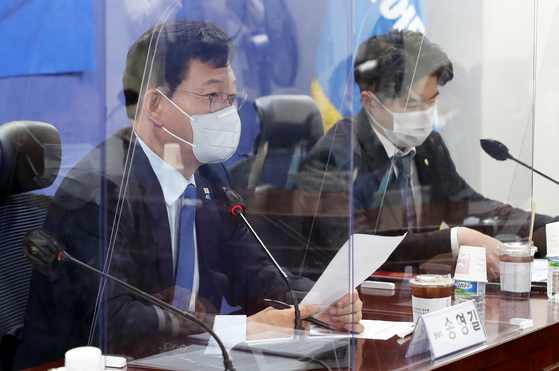 Democratic Party Chairman Song Young-gil, left, speaks at a meeting of the party and the government to discuss the recent collapse of a building in Gwangju that killed nine people. [NEWS1]


The ruling party faced criticism on Thursday after its head, Song Young-gil, said the fatalities from a recent building collapse in Gwangju could have been avoided if the bus driver of the bus they were on used his “instinct” and sped up the vehicle.

The ruling Democratic Party (DP) and the government on Thursday held a meeting to discuss last week’s collapse of a five-story building that killed nine people. The building in Gwangju Metropolitan City collapsed on June 9 while it was being demolished and fell onto a city bus that was stopped at a bus stop in front of the demolition site, killing nine people trapped in the vehicle. Eight others on the bus including the driver were seriously injured.

“If the driver would have used his instinct and stepped on the accelerator a little more when it was collapsing, they could still be alive,” DP Chairman Song said in his opening remarks of the meeting. “But the bus stop was in front of the construction site, and the terrible timing caused this unfortunate accident. Many people feeling angry after seeing the tragedy, which looks like a scene from a move.”

The main opposition People Power Party (PPP) on Thursday demanded that Song issue an apology for his “outrageous” remarks.

“Song must apologize for blaming an innocent victim for these heartbreaking deaths,” Rep. Hwangbo Seung-hee, chief spokeswoman of the PPP, said.

“Instead of analyzing the reasons behind the accident and presenting proper preventive measures, the ruling party head was making outrageous remarks,” she said. “No wonder this manmade tragedy is being repeated.”

“Song must seriously look back on himself and study the public sentiments,” Hwangbo said. “He must immediately apologize to the victims of the accident and the people.”

“I cannot believe this is a comment from the chairman of the DP, whose political stronghold is in Gwangju,” Gi Wu-sik, secretary general of the Participatory Autonomy 21, a civic group based in the city, told Yonhap News Agency.

The Gwangju Branch of the Korean Confederation of Trade Unions also criticized Song, saying, "He spoke as if the casualties were large because of the bus driver, who is also a victim."

After his latest remarks prompted criticism, Song immediately said he had no intention of blaming the bus driver. “I was not criticizing him,” Song said. “I was trying to point out that such a dangerous building was left in front of a bus stop. If the Gwangju Dong District had relocated the bus stop about 10 to 20 meters [33 to 66 feet] away from the demolition site, the tragedy could have been minimized.”

Song is not the first DP politician whose behavior toward the tragic accident prompted public outrage. Rep. Lee Byung-hoon of the DP, who represents Gwangju’s Dong-Nam District B, issued an apology on Wednesday for his own act toward the victims.

Last week, MBN aired an exclusive report that top government officials and DP lawmakers, including Lee, used the tragedy as a media event to promote themselves. According to the report, a tent was set up near the accident site to accommodate politicians, and the police were mobilized to arrange their visits. A government official even called the accident site an “event venue,” according to the report.

Lawmakers and city council members of Gwangju also sat laughing inside the tent, the report said. “Stop laughing and be careful, because [journalists] are watching,” one of them was quoted as saying.

Another lawmaker said he almost swore at a Gwangju resident who demanded a proper preventive measure, but suppressed the urge.

After the report, Rep. Lee posted an apology on his Facebook. “Inappropriate remarks and behaviors of several lawmakers reported the day after the accident are all my fault,” he wrote. “I offer a sincere apology.”