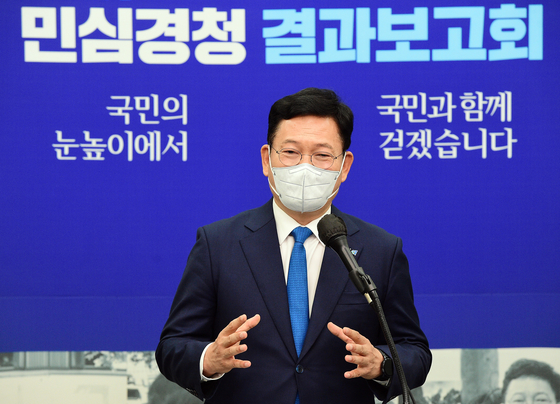 Chairman Song Young-gil of the Democratic Party talks during a press conference on Wednesday. [NEWS1]


The leader of the ruling party on Wednesday apologized for having caused disappointment over the suspected school admission frauds committed by former Justice Minister Cho Kuk, as the public increasingly revisit the scandal following Cho's recent publication of a memoir.

“The Democratic Party [DP] offers an apology again that we have failed to understand the young people’s feelings, hurt [by the scandal],” Chairman Song Young-gil of the ruling party said.

It is the second time in less than two years that the DP formally apologized over the scandal that shook the country for months in 2019. Following President Moon Jae-in’s nomination of Cho as the minister of justice in August 2019, various suspicions surfaced about him and his family, including his wife’s dubious investment of family assets and academic irregularities involving their daughter and son. Moon still appointed Cho to head the ministry in September, but he quit after 35 days. After his resignation, then-DP Chairman Lee Hae-chan issued the first apology of the ruling party.

Song, elected as the new chairman on May 2 after the DP’s crushing defeats in the April by-elections, held the press conference on Wednesday to announce his response to the latest public criticisms toward the administration and the ruling party. In addition to the Cho scandal, Song apologized for government workers using inside information to purchase real estate and top politicians’ sexual assaults, vowing that the party will expel all members suspected of admission and employment frauds, using inside information in real estate purchases and sexual crimes.

Song said the DP apologizes for having failed to understand the frustrations and despair of the people, particularly the young, and promised to work further to promote “equal opportunity, fair processes and just outcomes.”

Song admitted that DP members have used their networks to offer internships and opportunities to improve resumes to their children. “Although such a practice is not necessarily illegal, we disappointed so many young people who had no access to such a system,” he said.

While Song said in the apology that such a practice is not against the law, Cho’s wife, Chung Kyung-sim, was convicted last year on seven counts of admission frauds for her children. Her convictions include forging an award and obtaining fake internship certificates. She was ordered to serve four years in prison. 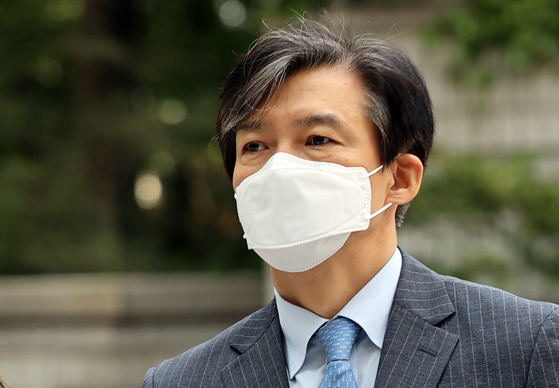 
Cho was also indicted on charges of colluding with his wife to unlawfully help their children get into prestigious college and graduate schools. His trial is still ongoing.

Song also defended Cho for having published the memoir. “I see the memoir as a summary of his defense arguments against some media reports that merely repeated the prosecution’s argument,” Song said. His position is similar to Cho’s Facebook statement on Tuesday in which he says he decided to publish the book as a means of self-defense because media had indiscriminately reported unsubstantiated charges against him.

Song, then, said the prosecution must investigate corruption suspicions surrounding the family of former Prosecutor General Yoon Seok-youl with the same intensity as they showed when going after Cho and his family.

Later in the day, Cho posted on Facebook an excerpt of Song’s apology. “I humbly accept his message,” Cho wrote. “As a person who no longer holds a public office, and as the head of a family slaughtered by the prosecution, I will do my best to defend and heal myself.”

In another post on Wednesday, Cho quoted his publisher, saying that more than 100,000 copies of his memoir were sold in one day.

The main opposition People Power Party (PPP) sneered at Song’s apology for its timing and apparent lack of sincerity.

“Two months after the by-election defeats, Song issued a belated public apology,” said Kim Ye-ryong, spokeswoman of the PPP. “And yet, Song said what Cho did is not necessarily against the law and his memoir is a summary of his defense arguments. Song’s apology is nothing more than self-defense and sophistry.”

Kim also said Song ignored the people once again by offering such an apology.