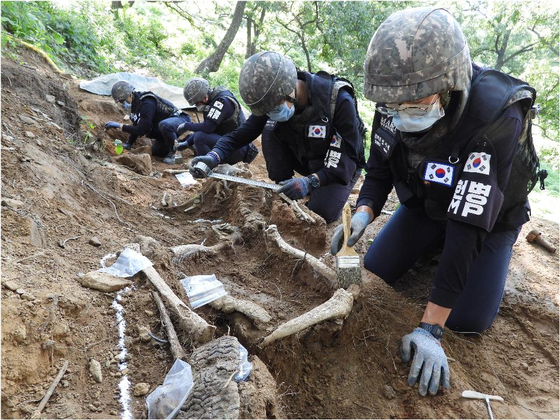 South Korean soldiers in April excavate the remains of troops who died in a battle at Arrowhead Ridge inside the present-day demilitarized zone during the 1950-53 Korean War. [MINISTRY OF NATIONAL DEFENSE]


South Korea plans to build a memorial at the site of one of the fiercest battles of the 1950-53 Korean War as part of its plan to turn the demilitarized zone (DMZ) into an international zone of peace.

The Inter-Korean Exchange and Cooperation Promotion Council, an inter-ministerial body chaired by Minister of Unification Lee In-young, ratified on Monday the allocation of 1.95 billion won ($1.76 million) toward building the memorial.

An additional 1.3 billion won was approved to restore a railway section in South Korea that the country hopes to one day connect with the North Korean railway system leading to Wonsan, Kangwon Province, on the eastern coast.

“Our government makes clear our sincerity and will to always fulfill [inter-Korean] promises,” Lee said in his opening remarks to the council. “We urge North Korea once again to undertake a generous decision to come forward on the road to peace and cooperation."

The money allocated to the project will largely be used to renovate an old military guard post in the area and transform it into a memorial hall. Inside the building, the government plans to set up an area to honor the fallen troops of the war and display items belonging to troops found in an excavation of the battlefield.

Arrowhead Ridge was the site of a brutal battle waged just days before the armistice was signed to end hostilities in the Korean War in July 1953. South Korean troops fought bitterly to reclaim several strategic high points in the DMZ before hostilities ended, losing over 200 soldiers in two separate waves.

Casualties on the Chinese side defending the hills in aid of North Korea are believed to range over 1,000.

The two Koreas agreed in their third summit in September 2018 to conduct a joint excavation project at Arrowhead Ridge as part of a military accord designed to reduce tensions and build trust.

But Pyongyang stopped all inter-Korean exchange projects following the collapse of denuclearization talks at Hanoi, Vietnam, in February 2019, leaving Seoul to conduct the excavations on its own.

From April to November 2019, the South Korean military dug out the remains of around 2,000 soldiers from both sides of the conflict, as well as from hundreds of landmines. A second round of excavations began in April 2020 in commemoration of the 70th anniversary of the outbreak of the war.

Lee noted the decisions approved by the council Monday and other efforts by Seoul to memorialize the war were steps toward fulfilling inter-Korean agreements. A key objective of the military pact is to convert the DMZ into a peace zone, in keeping with the Panmunjom Declaration signed by the two Korean leaders at their first summit in April 2018.

The minister also used the occasion Monday to address the significance of the change in presidential administrations in the United States for the Korean Peninsula, calling it a “turning point” in the situation.

“The [South Korean] government will work to use this time of transition to open up opportunity to improve inter-Korean ties,” Lee said.

“But first the South and North must discuss their inner ideas without hesitation and share wisdom in conversation.”