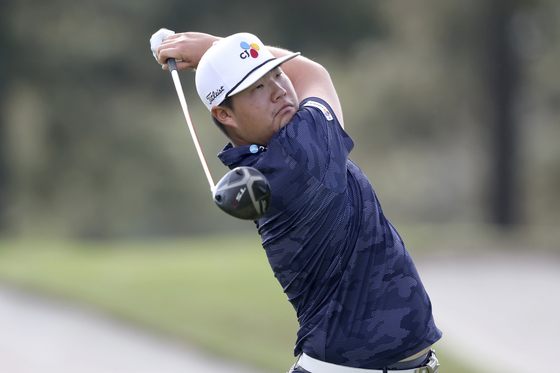 Im Sung-jae tees off on the third hole during the final round of the Masters golf tournament on Sunday in Augusta, Georgia. [AP/YONHAP]

Im tied for second with Cameron Smith of Australia at 15-under, five strokes behind the champion Dustin Johnson, who finished with a record 20-under 268. Johnson carded a 68 while Im and Smith each scored a 69 at the famed Augusta National in Augusta, Georgia, on Sunday. Im had five birdies and two bogeys.

Im's showing was the best performance by an Asian golfer, surpassing the third-place finish in 2004 by fellow Korean Choi Kyoung-ju. This was Im's Masters debut.

"Since this was my first Masters, my goal was just to make the cut," said Im, the 2018-2019 PGA Tour Rookie of the Year. "But I think I gained some confidence after staying in contention through the first two rounds. I'll remember this day for a long time."

Im, 22, played in the final group with Johnson and Abraham Ancer of Mexico. Johnson held the overnight lead at 16-under, four ahead of Im and Ancer. Im was the first Korean to be in the final pairing at the Masters.

Im birdied the second and third holes and got to within a shot of Johnson through five after back-to-back bogeys by the leader.

Johnson, world No. 1, bounced back with a birdie at the sixth, while Im fell back by four shots again after consecutive bogeys at the sixth and seventh.

"I had a great approach to the hole at the sixth, but I didn't have the putting stroke that I wanted," Im said. "I had about four feet left [for par], and I may have been too nervous."

On the strength of his performance at Augusta, Im cracked the top 20 in the world rankings for the first time. He jumped seven spots to reach No. 18 in the latest rankings. Im's previous career high was No. 20 from June.

Johnson pieced together three straight birdies starting at the par-5 13th to seal his first Masters and second career major.

Playing with Johnson, Im had the front-row seat to watch the master at work and break the Masters scoring record by two strokes. Tiger Woods in 1997 and Jordan Spieth in 2015 had each won the coveted green jacket at 18-under.

"Johnson plays golf so effortlessly," Im marveled at the champion. "He sends his drives far and straight. And he hits most of his second shots like he's playing a short iron. He is just too dominant."

Im said after the miscues at the sixth and seventh took him out of contention, he decided not to press too hard and focus on his own playing.

Though the putter betrayed him at the sixth, Im said he was still happy with the way he performed on the green at the tournament.

"Up until a few weeks ago, I was stressed out about my putting," Im said. "I brought a new putter for this week, and I think it helped me a lot."

The Masters is typically played in April, but the coronavirus pandemic pushed it all the way to November. Fans — or "patrons," in Augusta parlance — were absent. Im admitted he didn't feel as nervous as he would have been with spectators on hand.

And it showed in stats. Im had the fewest putts in the field with 102, and tied Patrick Reed for the most birdies with 24.