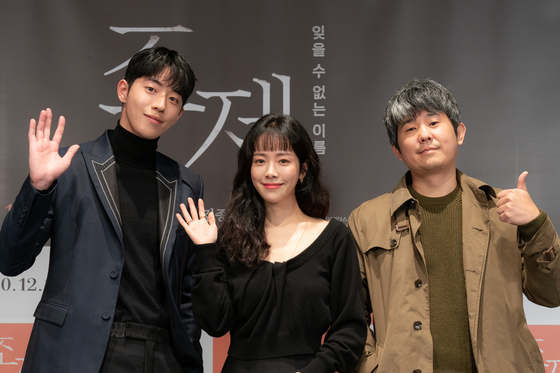 
It was evident from the emotion shown by actors Han Ji-min and Nam Joo-hyuk that their latest film "Josee" deeply touched them both.

At an online press event Thursday, after the actors watched behind-the-scenes moments from the film— Nam choked up while trying to speak while Han shed some tears.

“Seeing the footage unexpectedly brought up the emotions that I felt [through my character Young-seok],” Nam later said. “Like when he met Josee for the first time...Both of us—as Josee and Young-seok—acted sincerely on the set, and all the [memories] rushed back.”

Adapted from the popular Japanese romantic film “Josee, The Tiger And The Fish” (2004), the Korean remake is set to hit local theaters on Dec. 10. Director Kim Jong-kwan took the helm of the film, and said while he wanted to preserve the warmth of humanity that the two lovers feel through their relationship, he also wanted to focus more on the character of Josee, which is why the title was changed to simply “Josee.”

“I did feel the weight of the original film, [but] also had to consider the change of the era and if the story had aspects to succeed as a commercial film,” Kim said. “But I also wanted to preserve the humanistic aspects that the original novel and film had, and wanted to create my own kind of Josee through the film.”

“Josee is different from what people consider normal—she has her own world that she imagined through her books,” Han said as she described the character. “So her dialect is closer to a literary style instead of a colloquial form, and at first it took a while for me to enter her world.”

But the actor cited Josee’s peculiar way of viewing the world as one of the attractions of the character.

“The way she expresses her feelings or thoughts is unique,” she said. “Her language might feel unexpected or strange to the audience—she is certainly a character that hasn’t been around—but that’s what’s special about her, I think.”

In this remake, Kim also wanted to zoom into the locations, and he said that places such as Josee’s home, are another protagonist of the story that represent the film’s message.

“I wanted to spotlight the bitter and abandoned places, and hope the audiences can find beauty in those locations,” he said.

“Falling in love at first sight can happen, but Josee’s love is the kind that slowly seeps in,” Han said. “She meets this stranger Young-seok and as he enters Josee’s world [and home], that’s how their love [for each other] spreads. Their story is not just about being happy from their love, but contains multiple facets of emotions that come from love.”