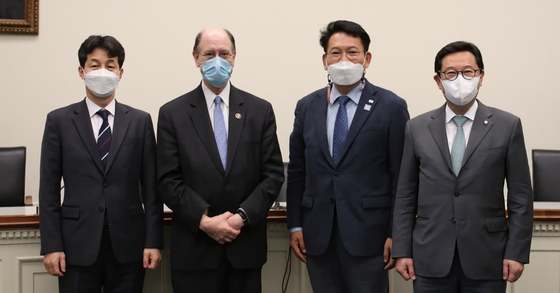 
Brad Sherman, the top Democrat on the House Foreign Affairs Subcommittee on Asia, on Monday told lawmakers of South Korea’s ruling Democratic Party (DP) that the Joe Biden administration is expected to take “realistic measures” toward the denuclearization of North Korea after next spring.

DP Rep. Song Young-gil, the head of a task force on Korean Peninsula issues, is leading a three-member DP delegation on a six-day trip to Washington this week to meet with U.S. officials as well as congressmen and policy experts close to Biden.

“In order for the denuclearization of North Korea, currently facing a triple handicap, prompt humanitarian aid, the easing of sanctions on the condition of a snapback clause and a phased solution is the only realistic solution,” Song's office quoted him as telling Rep. Sherman of California, during the talks at the Rayburn House Office Building in Washington.

Sherman was quoted by Song’s office as replying that it is important to prevent a provocation by North Korea in the first 100 days of the new U.S. administration.

The Biden administration will “boldly take realistic measures to progress North Korea’s denuclearization after spring next year,” he was quoted as saying.

He also conveyed that he would like to see North-U.S. parliamentary talks, if Pyongyang consents, as the two sides discussed realistic ways to revive denuclearization negotiations.

Sherman has publicly supported the continuation of the denuclearization of North Korea over the years, and in a recent Korean American Public Action Committee (Kapac) forum said that he backed a declaration to end the 1950-53 Korean War as well as the installation of a Pyongyang-Washington liaison office.

Sherman is considered as a possible candidate to become the next chair of the House Foreign Affairs Committee.

The DP lawmakers also met with Rep. Andy Kim, a Democrat of New Jersey, who was recently re-elected to a second term. The Korean-American congressman previously served in the U.S. State Department and as a National Security Council official under the Barack Obama administration.

Kim likewise relayed to the lawmakers that he would gladly convey any message to President-elect Joe Biden, according to Song’s office, indicating he is willing to play a liaison role between the Blue House and White House.

The Korean Peninsula task force has been using parliamentary diplomacy to reach out to figures close to President-elect Biden on the heels of the U.S. election earlier this month. They have stressed the importance of continuing denuclearization negotiations with North Korea to enable permanent peace on the peninsula.

They planned to meet with U.S. Deputy Secretary of State Stephen Biegun, who doubles as special representative for North Korea, on Tuesday in Washington.