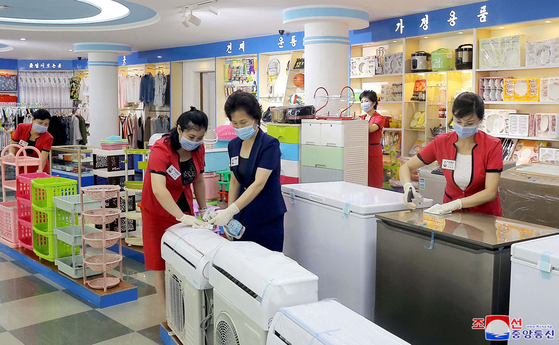 North Korean workers disinfect a department store in Pyongyang, according to footage released by Korean Central Television in August. [YONHAP]


The World Health Organization (WHO) reported thousands of suspected Covid-19 cases in North Korea, again contradicting the regime's official insistence that it has no infections on its soil.

According to the organization’s weekly situation report on the pandemic in East and South Asia published this week, 6,165 North Korean nationals and eight foreigners were “detected as suspicious cases” in the North.


The number of suspect cases in North Korea doesn't represent a significant departure from those provided by the WHO in its previous reports.


Of the 6,165, 805 cases were discovered after Pyongyang intensified surveillance in the week of Nov. 22 to 29, the report added. Of those, 174 were placed under quarantine during that period, while 32,182 were released from isolation on Nov. 29.

The report added, however, that there were no “reported” cases of Covid-19 in the country as of Nov. 5, suggesting the regime may not be acknowledging suspected cases as actual infections.

For months now, North Korea has been on high alert over the pandemic, sealing off its borders and mounting a nationwide anticoronavirus program, all while mobilizing its people in an 80-day economic development campaign until a key party convention is held in January.

In July, a former defector to the South returned to his hometown of Kaesong via a sea channel on the western coast, prompting North Korean leader Kim Jong-un to declare a state of emergency in the area and blocking it off from other parts of the country.

The tough measures undertaken by the regime throughout the year indicated the extent to which officials fear the devastation the virus can potentially wreak on the country’s ill-equipped health care system.

That inadequacy was why the regime was so quick to shut down its border with China and Russia early on in January, as well as forcing thousands of people, including foreigners, into weeks-long isolation.

On Monday, Kim presided over a meeting of the Political Bureau of the country’s ruling Workers’ Party in which he stressed that the country needed to “keep a high alert, build a tight blocking wall and further intensify the antiepidemic work,” state media reported.

According to a South Korean Ministry of Unification official on Tuesday, Pyongyang is likely to maintain such restrictions on its border for some time, and there has been no movement in the country suggesting the precautions are easing.

“Given that other countries have been strengthening antiviral measures in preparation for another spread of Covid-19 during the wintertime, North Korea for the time being is also not expected to loosen the shutdown of its border,” the official said.

The official’s observations were a response to reports in some South Korean outlets suggesting the regime may loosen border controls due to the devastating impact the closure is having on the country’s already beleaguered economy.