A North Korean man caught by South Korean soldiers in the eastern border region while attempting to defect to the South on Tuesday appears to have crossed the sea border wearing a diving suit and a set of fins, the military said Wednesday.

"The man likely swam across the maritime border, came ashore near an observatory south of South Korean general outposts [GOPs] and passed through a drainage channel under the fences lining the shore," explained the Joint Chiefs of Staff (JCS) in a press release. 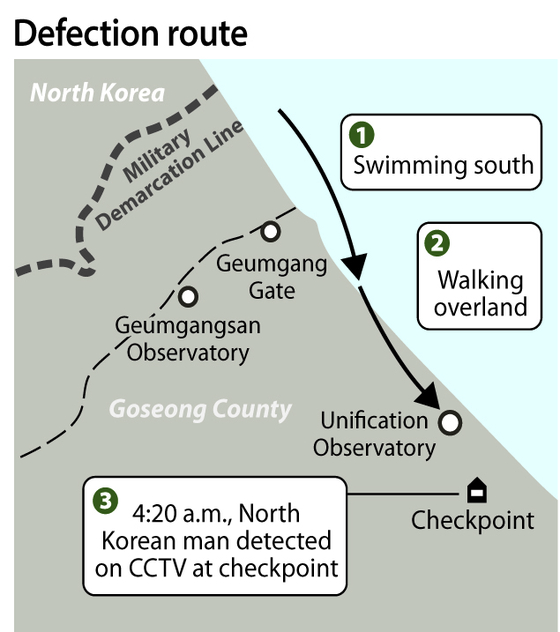 According to the JCS, the diving suit and fins the man used were found on the beach in Goseong, Gangwon, where he reached land. The diving suit was not made of rubber, but was the type with a detachable helmet made of metal used by North Korean fishermen.

The JCS acknowledged that the man was recorded on the military's surveillance equipment multiple times after arriving ashore, but South Korean Army units failed to undertake appropriate action. The JCS also said that the barriers inside the drainage channel were insufficiently secured against penetration.

A three-hour manhunt for the man was launched only when he was spotted moving south at 4:20 a.m. on Tuesday by a CCTV surveillance camera controlled by the 22nd Infantry Division inside a restricted area north of the Civilian Access Control line. He was caught by the army at 7:20 a.m.

The man is in his 20s and is reportedly a civilian who has expressed his desire to defect to the South. Military authorities and intelligence agencies are investigating how the man managed to swim across the border in the winter.

"We take this situation gravely and are conducting an onsite investigation with the Ground Forces Command," the JCS said in its press release. "We will take follow-up measures and stern actions according to the results of the investigation."

Tuesday's defection marks the third time in recent years that North Koreans have defected through the section of the inter-Korean border under the watch of the 22nd Infantry Division.

The military previously vowed to improve border surveillance after a North Korean civilian in November was able to cross into the South by throwing a blanket atop the barbed wire before vaulting the fence. The so-called "fence defection" was blamed on malfunctioning sensors installed at the fences.

In 2012, a North Korean soldier made his way to a guard post and knocked on the door to announce his desire to defect in what became known as the "knock-knock defection."

The military has come under criticism for what the South Korean media is now calling the "swimming defection."

"It's only been three months since the border at Goseong was last breached," wrote independent Rep. Yoon Sang-hyun in a Facebook post on Tuesday. "Even socks don't get holes this often."