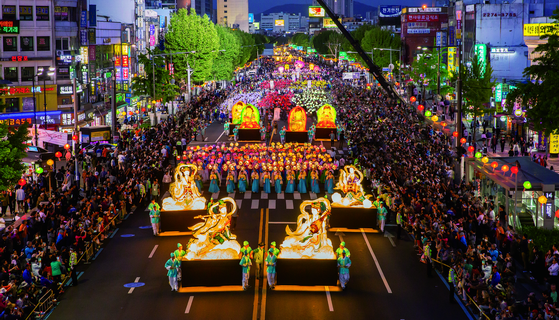 Yeondeunghoe, which is one of the biggest Buddhist festivals with lights to celebrate Buddha’s birthday, also known as the Lantern Lighting Festival, may become inscribed as an intangible cultural heritage by Unesco.

The Cultural Heritage Administration announced last week that Yeondeunghoe was among the 25 successful applicants that were recommended by the Unesco preliminary review panel to be added to the list.

A final decision will be made during the 15th session of the Intergovernmental Committee for the Safeguarding of the Intangible Cultural Heritage, which will be held online from Dec. 14 to 19 at Unesco’s Paris headquarters. If the recommendation is finalized, Korea will have 21 intangible cultural assets, which include pansori (traditional narrative singing), the royal ancestral ritual at the Jongmyo Shrine and its music, as well as the culture of Jeju Island’s haenyeo, or female divers.

The annual event, held in line with Buddha's birthday that falls on April 8 on the lunar calendar, symbolizes lighting up the world to make an abundant and fair place for everyone. It was designated as a national intangible cultural asset in 2012.