A visitor admires different lanterns on display at the "Yeondeunghoe: Lighting up the mind and the world" exhibit at the Central Buddhist Museum in central Seoul. [NEWS1]


Korea shines brightest in May as cities across the country gear up to celebrate Buddha’s Birthday, a major Buddhist holiday in Korea.

Throughout May, celebratory events are organized and the lantern parade in central Seoul, considered the highlight of the Yeondeunghoe, or lantern lighting festival, takes place. This is the time of the year when streets are festooned with colorful lotus lanterns and people participate in parades, carrying lanterns they made to express good wishes for themselves, their families and their neighbors.

Preparation for Buddha’s Birthday this year, which falls on May 19, began earlier than usual, and the hype was especially high since this is the first Yeondeunghoe since the festival was inscribed on Unesco’s Intangible Cultural Heritage of Humanity List in last December. Many Buddhist believers and Buddhist temples were praying earnestly for the pandemic to come to an end by spring 2021 so they could celebrate Buddha’s Birthday as a grand festival. 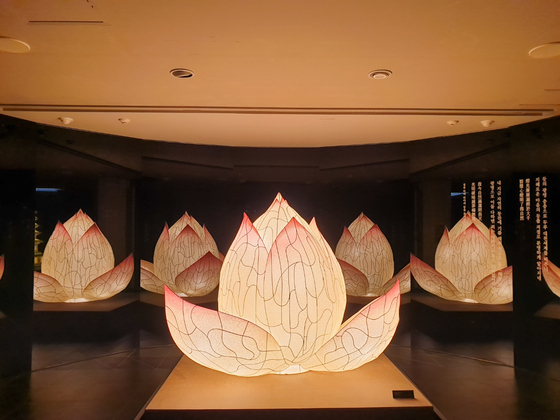 A lotus-shaped lantern on display at the Central Buddhist Museum. [CENTRAL BUDDHIST MUSEUM]


But for the second consecutive year, the signature lantern parade has been canceled due to the rising cases of Covid-19 in the country.

The Jogye Order of Korean Buddhism said it will “not lose its joyful heart, and [will continue to] hold various celebratory events, many of which have been taken online, to make this year’s birthday party particularly special.”

The exhibit, which kicked off on April 14, is being held to commemorate the Unesco inscription of Yeondeunghoe and to let the public know more about the lotus lantern festival. 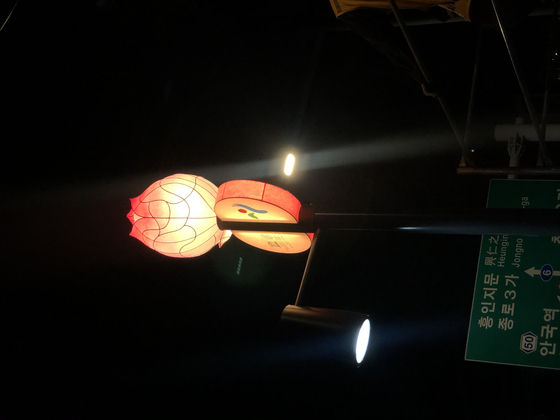 A lotus-shaped lantern is installed atop a bus stop in Jongno District, central Seoul. [THE JOGYE ORDER OF KOREAN BUDDHISM]

The festival has been handed down through the years as a part of the culture of the Three Kingdoms period (57 B.C. to A.D. 668) to the present. When the event was inscribed last December, the Cultural Heritage Administration said that Yeondeunghoe was “able to be recognized for being a festival not only for Buddhist believers but also for nonbelievers. It's a festival at which individuals participate as equal members of society regardless of gender or age."

The exhibition is divided into three sections. In the first section, visitors will be able to examine the value of Yeondeunghoe as an Intangible Cultural Heritage of Humanity. They will also learn about the origin of the lantern parade and what makes up the modern lantern parade.

“The leading section of the modern lantern parade is a typical king’s parade of the Goryeo Dynasty that traveled between Bongeun Temple and the palace,” said Ko Sang-hyun from the museum. “We tried to create a realistic exhibition with animated videos so that people can see the lantern parade at a glance and feel like they are a part of it.”

The second section tells about the history and culture of Yeondeunghoe and showcases how the lanterns are produced. One of the characteristics of lanterns for Yeondeunghoe is that they are crafted by traditional artisans using traditional Korean paper, or hanji, and that the knowledge and skills are passed down through generations through the repeated annual practice of Yeondeunghoe.

The exhibit runs until July 23.

Besides the exhibit, “Yeondeunghoe Festival” will kick off on Wednesday with the lighting ceremony of a pagoda-shaped lantern that will be erected at Gwanghwamun Plaza in central Seoul. It will light up at 7 p.m. Wednesday and every evening after sundown until May 30. 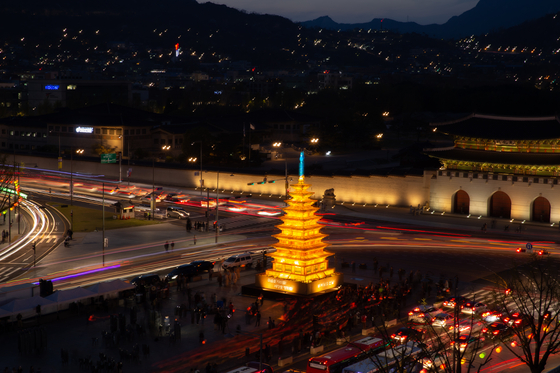 A pagoda-shaped lantern will light up at 7 p.m. on April 28 at Gwanghwamun Plaza in central Seoul to kick off Buddha's Birthday festival this year. [THE JOGYE ORDER OF KOREAN BUDDHISM]


In addition to the lantern parade, the Jogye Order of Korean Buddhism said it will decorate streetlights with Buddhist-style lanterns in several areas in Seoul including the Cheonggyecheon area (May 7 - 21), near Jogye Temple (May 8 – 30) and the Ujeongguk-ro, commonly known as Buddhist Street, in central Seoul (April 28 – May 30).

The official ceremony to celebrate the Unesco inscription of Yeondeunghoe will be held on May 15 at 6 p.m. at Jogye Temple, which will be available to view online. Organizations that have helped make the inscription of the festival possible will be connected via Zoom to give speeches. Various performances will also be held.


Online classes have been organized where people can learn how to make their own hanji lotus lantern or lotus-shaped dream catcher, how to sword dance and more. For more information on the festival, visit www.llf.or.kr/eng/