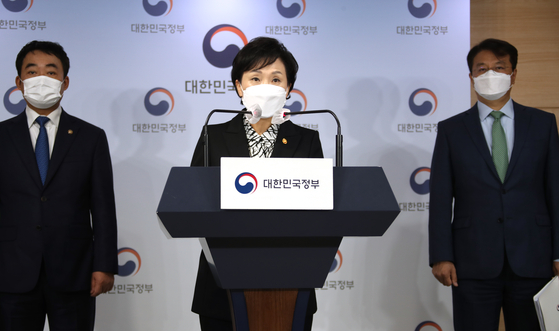 Land Minister Kim Hyun-mee announces the government plans to supply jeonse housese in stablizing the market including remodeling hotels at the government complex in Seoul on Thursday. [YONHAP]


The government will increase supplies of residences by 114,000 units over the next two years, including repurposing hotel rooms and office space.

This is the 24th set of real estate measures introduced by the Moon Jae-in government, which has been trying to drive down real estate prices since its first day in office in May 2017.

The units promised Thursday will be let on jeonse, or lump-sum deposit, contracts to attempt to bring down skyrocketing jeonse prices.

According to the Land Ministry on Thursday, 61 percent, or 71,400 units, will be supplied in the greater Seoul area, which includes Incheon and Gyeonggi.

That includes 39,000 units owned by government developers such as the the Seoul Housing & Communities Corporation and Land and Housing Corporation that have been vacant for at least three months.

In the greater Seoul area there are 16,000 such units.

The government said it will start accepting rental applications for the units in the next few weeks. Tenants will be able to move in by February.

The government said its Land and Housing Corporation will buy 7,000 apartments recently built by private construction companies, 6,000 in the greater Seoul area.

In the second half of next year, the government will repurpose hotels, motels and vacant commercial space to create 26,000 residences, 19,000 in the greater Seoul area.

In 2022, it will make available a total of 38,000 units including 23,000 bought from private construction companies and 7,000 units created through repurposing hotel and commercial space.

Some questions have been raised over whether converting hotels and offices to rental houses is feasible. The idea was made public by Democratic Party leader Lee Nak-yon on Wednesday.

During a press briefing on Thursday, Land Minister Kim Hyun-mee defended the idea, stressing that the repurposing of hotels and commercial space is only a small part of the government’s plan.

“[Hotel remodeling for residential purpose] only takes up 2 to 3 percent among the 5,400 units [to be] supplied in Seoul,” Kim said.

Stressing that such repurposing is popular in Europe, Kim said the public will be able to see for themselves the transformation of hotels into low-rent, high-quality housing units for families of two members or less.

During a government meeting on Thursday, Finance Minister Hong Nam-ki apologized for chaos in the real estate market.

“While many tenants benefited in extending their rental contracts through the three pieces of legislation protecting tenants, I apologize for the difficulties that some tenants experienced in finding new homes due to their previous rental contracts expiring,” Hong said.

The Democratic Party in July rammed through three pieces of legislation that increased protections for tenants by automatically renewing jeonse contracts after the first two years expire and limiting hikes in jeonse contracts to 5 percent.

Hong said recent chaos in the real estate market isn’t only caused by policies. Seasonal factors also had an impact, he said, such as autumn being a popular moving season.

He also cited changes in family structures, such as the growth in smaller families, adding pressure for more supplies of housing units.

“[The government] has focused efforts on stabilizing the housing market,” Kim said. “However, the jeonse market has become unstable.”

The Land Minister, however, stressed that the legislation had positive effects.

She stressed that it has made a huge contribution in protecting the tenants’ rights and stabilizing the housing transaction market.

“In July, the legislation on tenant’s rights was reformed for the first time in 31 years,” Kim said. “The renewal of jeonse contracts before the law went into effect was 57.2 percent, but in October it rose to 66.2 percent.

Seven out of 10 [tenants] were able to continue to live in the same apartment without worrying about the jeonse burden.”

She said the legislation was a “precious achievement.”

“The right to live [in a house] as long as one wants without having to own the house and the right to a stable life by buying one’s own house are precious rights that the government should protect,” Kim said. “The government will continue to protect people’s residential rights.”

According to the Korea Appraisal Board, jeonse prices nationwide as of Nov. 9 increased 0.27 percent compared to the previous week.