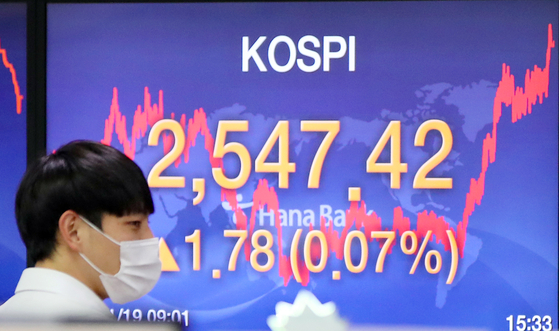 A screen shows the final figure for the Kospi in a dealing room in Hana Bank in Jung Distrct, central Seoul, on Thursday. [YONHAP]


Stocks continued to build up gains Thursday after hitting a nearly three-year high the previous session, as battery makers remained in positive terrain amid concerns of surging Covid-19 cases. The won sharply fell against the dollar.

Trading volume was moderate at about 961 million shares worth some 12.3 trillion won ($11 billion), with losers outnumbering gainers 533 to 298.

The mild gains came after hitting a 33-month high in the previous session. Investor wariness increased over valuation pressure and rising coronavirus cases.

The number of daily new coronavirus cases in Korea exceeded 300 for the second consecutive day Thursday, with authorities warning of another wave of the pandemic.