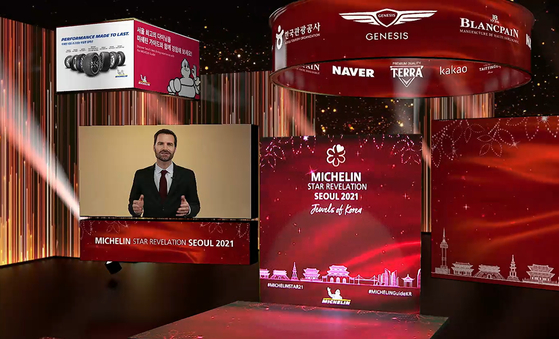 
The Michelin Guide Seoul 2021 awarded stars to 32 Korean restaurants this year including four new ones. No changes were made to the restaurants with two and three stars, the highest accolades by Michelin, in a ceremony livestreamed on Thursday.

Gaon and La Yeon have held their three-starred rankings since they were first awarded them when the Michelin Guide Seoul was established in 2016.

The guide’s 2021 Seoul edition once again put the focus on restaurants that pursue modern takes on classic Korean recipes.

7th Door by chef Kim, who is more widely known to the public thanks to his casual dining spot TocToc, focuses on the fermentation and aging of ingredients. The number seven was chosen to represent the five basic flavors — sweet, salty, sour, bitter and gamchilmat, more commonly known by its Japanese name, umami — as well as the process of aging and the touch of the chef.

“Accumulated data is the key to making aging and fermenting work well, and I’m on the hunt to find the best environment and combination, and hand down data I have learned with other staff so that they can make their mark and evolve the processes we have created," said chef Kim who uses basic Korean techniques to make variations of dishes that evoke Chinese and Japanese flavors. He assures no guest will ever be served the same course twice.

“We have the base ingredients prepared through our aging and fermentation techniques, and then we add the freshest ingredients each day to create a menu you will only see on that specific day.”

The guide also showed its appreciation for West meets East. Chef Son of L’Amant Secret which is located in a hotel that describes itself as "a Parisian escape in the heart of Seoul," adds a global touch to the plates he serves, drawing from his experience at restaurants in the United States, including three-starred Quince.

The additions of Muni and Mitou bring the total number of Japanese restaurants on the Michelin Guide Seoul to three. The pair join sushi spot Kojima, which is the only Japanese restaurant on the list to go from a one-star rating to a two.

The fifth edition of the Michelin Guide Seoul introduced new accolades this year — the Mentor Chef Award and the Young Chef Award.

Chef Cho Hee-sook of Hansikgonggan, considered a teacher to many including chef Kang Min-goo of two-starred modern Korean restaurant Mingles, won the Mentor Chef Award. It's been quite the year for Cho who was also named Asia’s Best Female Chef for 2020 in February as part of the annual Asia’s 50 Best Restaurants’ celebration.

The Young Chef Award went to Joseph Lidgerwood of Evett, which received its first one star last year. The chef, who is originally from Australia, has been presenting his interpretations of dishes using Korean ingredients, different from the styles of those who have grown up in the country.

This year also marked the first time for restaurants to be awarded ‘green stars,’ to recognize establishments that promote sustainable and eco-friendly growth by minimizing food waste or using organic or biodynamic ingredients.

A Flower Blossom on the Rice obtains about 95 percent of its ingredients directly from farms all across Korea, according to the Michelin Guide Seoul. It specifically does business with farms that have either organic or biodynamic certificates, use no chemicals or are focused on animal welfare.

Hwanggeum Kongbat, known for its dubu, or tofu, sources its ingredients fresh from all across the nation. It communicates with local merchants to get the freshest ingredients while leftover ingredients are reused to feed animals in a bid to minimize food waste.

To attract more people to follow the gastronomic news, the Michelin Guide Seoul this year collaborated with Kakao and used an image of one of Kakao's main characters, Ryan, on the paper version of the guide book.