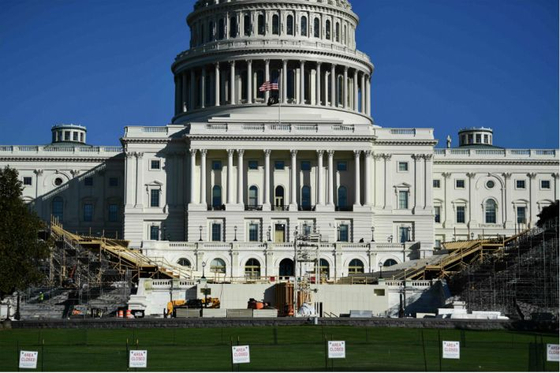 The U.S. House of Representatives adopted two resolutions Wednesday on strengthening the South Korea-U.S. alliance with bipartisan support, highlighting that the partnership plays a crucial role in ensuring peace and stability in the region.

The first resolution, “Expressing the importance of the United States alliance with the Republic of Korea and the contributions of Korean Americans in the United States,” was initially introduced in the House in January by Rep. Thomas Suozzi, a Democrat from New York, and notes that the relationship is “deep and mutually beneficial to both countries.”

It goes on to recognize “the vital role of the alliance between the United States and South Korea in promoting peace and security in the Indo-Pacific region,” and calls for a strengthening of such ties, saying the relationship “is central to advancing United States interests and engagement in the region, based on shared commitments to democracy, free-market economics, human rights, and the rule of law.”

“Affirmation of this alliance during this time of transition to a new administration and a new Congress is being closely watched throughout the Indo-Pacific region,” Rep. Suozzi told the House Wednesday. “The United States and South Korea have a special diplomatic, economic and security relationship strengthened by shared strategic interests and a commitment cemented by democratic values.”

Suozzi called on Congress “to continue to strengthen diplomatic, economic, and security ties between the U.S. and our vital ally, South Korea” and also recognized that some 2 million Korean-Americans “contribute so much to the fabric of our American communities.”

Another House resolution, “Recognizing the 70th anniversary of the outbreak of the Korean War and the transformation of the United States-Korea alliance into a mutually beneficial, global partnership,” introduced by Reps. Ami Bera, a Democrat from California, and Ted Yoho, a Republican from Florida, in June, was also adopted by consensus that day.

Marking the 70th anniversary of the outbreak of the 1950-53 Korean War this year, the resolution underscores that this was “the symbolic start of the ironclad United States-Korea alliance that was forged in blood” and states that South Korea is “one of the lynchpins of United States foreign policy in Northeast Asia.”

It also notes, however, that the “Armistice Agreement remains in force today and that by its terms has neither formally ended the Korean war nor constituted a permanent settlement of peace on the Korean Peninsula.”

It recognizes South Korea’s contributions to Covid-19 containment efforts, including the donation of 500,000 masks for Korean War veterans in the United States and another 2 million to be used in American hospitals.

The resolution “reaffirms the role the alliance plays in ensuring peace and stability in Asia and the world,” and highlights the ties between the people and governments of the two nations and in Covid-19 cooperation.

It further urges both countries to “prioritize ongoing Special Measures Agreement [SMA] negotiations and to reach mutually agreeable terms” to speed along stalled defense cost-sharing negotiations. The previous bilateral SMA expired at the end of 2019 and the two sides have struggled to seal a new deal as the Donald Trump administration has demanded Seoul pay an exponentially higher contribution.

The Suozzi resolution likewise called for a sealing of a “mutually agreeable multi-year” defense cost-sharing deal.

“Our ties with the Republic of Korea are enduring,” said Rep. Bera, chairman of the House Foreign Affairs Subcommittee on Asia, the Pacific, and Nonproliferation. “They are based on our shared people-to-people values, our vibrant Korean-American community, and American ex-patriots in South Korea and our economic ties.”

Bera, also a co-chair of the Congressional Korea Caucus, recalled South Korea’s transformation after the devastation of the war and said, “Today, the Republic of Korea is one of the most widely respected countries in Asia and the world. It has been incredibly successful against the Covid-19 pandemic and has helped the United States in our own battle against it.”

He continued, “President-elect [Joe] Biden has recognized the value of our relationship with Korea and his call to President Moon Jae-in was one of the first calls to a foreign leader.”

Similarly, Rep. Eliot Engel, a Democrat of New York and Foreign Affairs Committee chair, said, “In the 70 years since the outbreak of the Korean War, the U.S.-Korea alliance has grown to become an indispensable partnership for defending and promoting peace, prosperity and stability in the Indo-Pacific and beyond.”

He added, “Our security posture in the Korean Peninsula isn't just beneficial to the Republic of Korea, it's a benefit for American security as well.”

Engel also noted that when the United States “faced crippling shortages in essential protective gear” amid the Covid-19 pandemic, “South Korea stepped up to help us in our time of need.”

Rep. Yoho said, “Americans and South Koreans understand the importance of defending democracy against malign actors who seek to undermine it at every turn,” without mentioning specific countries.

He added, “Through new and unforeseen challenges, the U.S.-ROK alliance continues to strengthen and evolve and we look forward to close cooperation and friendship in years to come." ROK is the acronym for South Korea's official name, the Republic of Korea.

The resolutions were passed as Rep. Song Young-gil led a delegation of ruling Democratic Party lawmakers of a Korea Peninsula task force on a weeklong trip to Washington since Sunday to meet with congressmen, scholars at think tanks and supporters of Biden.

As the two House resolutions on the Korea-U.S. alliance come ahead of the launch of a U.S. administration in January, there are expectations in Seoul that it could help set a positive tone for the Biden team’s foreign policy toward the Korean Peninsula.