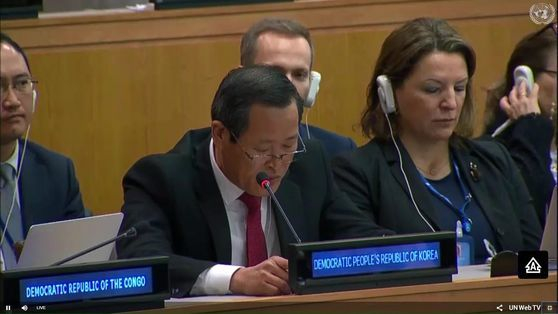 A United Nations committee on Wednesday adopted a resolution calling for the improvement of the human rights situation in North Korea, which if passed by the UN General Assembly will be the 16th of its kind.

The latest resolution, drafted by the European Union (EU), was passed by consensus at the UN General Assembly Third Committee on social, humanitarian and cultural issues, and was similar to the resolutions passed in previous years since 2005.

South Korea was not a co-sponsor of the resolution for a second consecutive year, though it participated in its passage by unanimous consent.

Seoul’s Ministry of Foreign Affairs said in a statement Thursday that the South Korean government “joined the consensus as it did last year in line with its basic position that it works with the international community toward substantive improvements in the human rights situation of the people of the DPRK,” using the acronym for the Democratic People's Republic of Korea, North Korea's official name.

The resolution is largely similar to last year’s resolution condemning the “systematic, widespread and gross violations of human rights” in North Korea, urging for the UN Security Council to refer the situation to the International Criminal Court.

However, the ministry noted that the resolution, amid the coronavirus pandemic, expresses concern over the negative impact of Covid-19 on North Korea’s human rights and humanitarian situation, and “stresses that any restrictions to address the pandemic should be in conformity with international human rights law.”

It added that it also stressed the urgency of the issue of families separated in the Korean War and the importance of dialogue and engagement.

The resolution comes after a South Korean fisheries official was shot and killed by North Korean soldiers north of the inter-Korean maritime border in the Yellow Sea in September.

German Ambassador to the United Nations Christoph Heusgen, speaking on behalf of the EU, told the Third Committee session Wednesday, “The resolution reflects our deep concern with regard to the severe human rights situation in the DPRK. Unfortunately we have not seen any improvements in this regard in the past 12 months.”

Heusgen, who chairs the UN Security Council Sanctions Committee on North Korea, added, “Regrettably, there have not been any positive developments in the inter-Korean dialogue nor in the engagement of the DPRK with other UN members on human rights.”

The ambassador also quoted the latest report of the special rapporteur on the situation of human rights in the Democratic People’s Republic of Korea released last month which described that “decreased contact with the outside world during the Covid-19 pandemic could exacerbate entrenched human rights violations, with more freedoms being restricted.”

The draft resolution, he said, reflected such concerns and “addresses the systematic, widespread and gross violations of human rights in the DPRK and urges the government of the DPRK to respect fully all human rights and fundamental freedoms.”

He noted that the EU “pursues a policy of critical engagement with the DPRK.”

Kim Song, the North Korean ambassador to the United Nations, shot back by rejecting the draft resolution, describing it as a “political plot that has nothing to do with the promotion of and protecting human rights.”

He said that “none of the human rights violations referred to in the draft resolution exist in the DPRK.”

Kim said that North Korea “will never tolerate any attempt or act to abuse human rights for alternative political purposes” and “will strongly respond to such a confrontational approach.”

He also attacked North Korean defectors, saying that the document is based on fabricated information “cooked up by human trash defectors” and “hackneyed accusations against the DPRK.”

Kim also took a shot at Tokyo, another co-sponsor of the resolution, referring to Japan’s forceful drafting of wartime laborers and sex slaves during its colonial rule over Korea, saying this “should be duly brought into stern judgment by the international community” and that Japanese authorities “must be aware that there is no statutory limitation of this crime against humanity.”