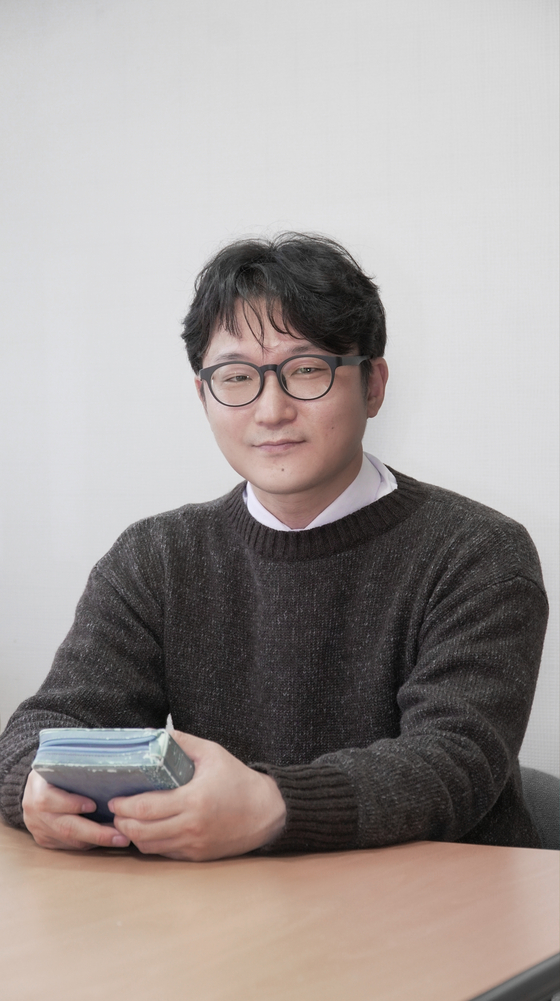 Pastor Lee Dong-hwan sits down for an interview with the Korea JoongAng Daily in his office in central Seoul. [JEON TAE-GYU]


“A hundred years from now, the church will have changed. And when that time comes, I want you to be sure that you won’t be embarrassed of your own decisions. Don’t be a sinner in the face of history.”

When Pastor Lee Dong-hwan began to doubt his decision to give a blessing at the second Incheon Queer Culture Festival last year, his wife was the one who encouraged him to stand strong not only in the face of history, but also God.

On Aug. 31, 2019, Lee, who is part of the Korean Methodist Church, took to the stage of the queer festival, clad in a white robe to bless those in attendance, throwing flower petals and offering a prayer. Just three days afterward, he was required to attend a meeting at a gathering in Suwon, Gyeonggi, where his church is located.

A day later on Sept. 4, he was reported by the Incheon Pastor’s Gathering for Healthy Society (represented by Pastor Seong Jung-kyeong) and the Chungcheong Annual Conference of the Korean Methodist Church (represented by Pastor Lee Gu-il) to the Gyeonggi Annual Conference for violating the Book of Doctrines and Discipline by advocating and agreeing with homosexuality.

On Oct. 15 this year, he was sentenced to two years of suspension of duty by the Korean Methodist Church. He appealed that decision but a retrial date has yet to be set, leaving Lee in limbo as he cannot preach. 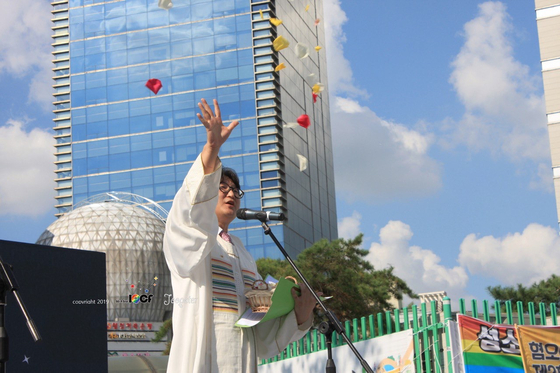 Pastor Lee Dong-hwan throws petals into the air while giving a blessing on Aug. 31, 2019, at the second Incheon Queer Culture Festival. [YONHAP]


“At first, I really didn’t feel like it was a big deal,” said Lee in an interview with the Korea JoongAng Daily last week. “I was aware of the fact that there was an article in the Book of Doctrines and Discipline that punishes anyone advocating or agreeing with homosexuality. But when I heard that I was reported to the conference, I thought that the case would just be dismissed by the committee. I thought that the committee members would know that blessing people is not a sin and simply dismiss it as not important.”

Lee was wrong. After he was initially reported, the committee demanded that he write a letter swearing to never carry out such a blessing again. He refused. On June 29, he received a letter of indictment from the Gyeonggi Conference informing him that he had been suspended from his duties pending a trial by the committee.

“A sense of isolation overwhelmed me,” Lee explained. He said he burst into tears after walking out of the first questioning session by the committee. “I was alone in the room, surrounded by senior pastors who were all questioning my actions and thoughts. I was young and alone and insecure. I went in feeling small and came out feeling even smaller. They told me I was humiliating the Methodist Church and I really didn’t know what to say. Should I tell them that I’m sorry or that I still believe in myself? I had no one to ask and I was on my own.”

A myriad of internet comments that reflected Korean sentiment against sexual minorities followed. News reports on Lee's suspension garnered posts that said Lee's suspension was unfair — because it was too lenient.

"Just because they're minorities doesn't mean their human rights should be respected. Would you still respect your child if it goes against nature's law to act like an animal?" reads a comment with 400 likes and 180 dislikes on a report about Lee's suspension on web portal Naver. Another comment with 70 likes and 10 dislikes reads, "He should be excommunicated, not suspended. He needs to read the 10 commandments again and repent."

“To be honest, I had the same thoughts about sexual minorities as anyone brought up on conservative Christian soil would,” he said. “When a member of my congregation told me he was gay, I was so taken by surprise that I started sweating. Even I had thought that a homosexual would be a strange person, so all I could do was just tell him to pray with me. I did thank him for having the courage to tell me. Afterward, I studied the Bible to see what passages were relevant, how other countries were handling such situations and even psychological and medical studies to address my own prejudice." 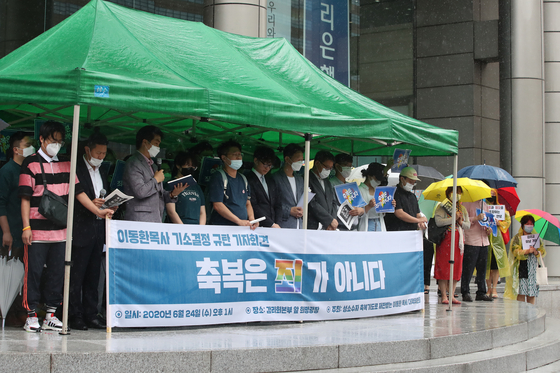 Protestors gather on June 24 in front of the Korean Methodist Church headquarters in Gwanghwamun, central Seoul, demanding the church revoke its decision to suspend Lee. [YONHAP]


But it wasn’t long until Lee realized that he was far from alone. Phone calls began flooding in from all over the country from people expressing their support, while more than 100 pastors signed an official statement in defense of Lee, and 8 million won ($7,200) was donated to cover the costs of filing an appeal.

Lee questions why he had to pay to appeal as well as why he was punished so severely.

“There are five levels of punishment in the book of doctrines,” he said. “They range from reprimand to probation, suspension, dismissal and excommunication. The punishment for regulations related to homosexuality begins from suspension, and at most, can lead to a two-year suspension. Basically, I was punished to the highest order. A two-year suspension usually ends a pastor’s career. In comparison, Pastor Jeon Jun-ku, who was accused of embezzling church money and sexually assaulting his followers, was found not guilty by the church.

“He once served as the head of the Korean Methodist Church and has a large following, which means he’s rich. The church can’t ‘mess’ with him, but it makes me feel powerless. How far has the church gone?" 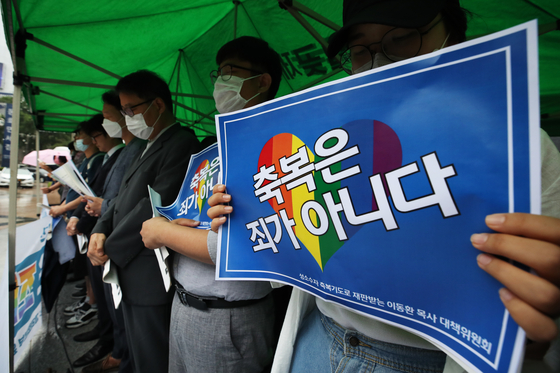 Protestors hold a card reading ″A blessing is not a sin″ on June 24 in front of the Korean Methodist Church headquarters in Gwanghwamun, central Seoul, demanding the church revoke its decision to suspend Lee. [YONHAP]


The Korean Methodist Church's ruling was based on the simple logic that because Lee blessed the attendees at the queer festival, he was advocating and agreeing with homosexuality. As a member of the Methodist Church, it was his duty to uphold the teachings and doctrines, and to go against those teachings is to challenge the church.

In an interview held after the trial, committee head Hong Seong-guk said that the case would have never gotten so serious, “if only Pastor Lee said that he doesn’t agree with homosexuality.” Lee said that's one thing he cannot do.

“Homosexuality is not a sin, nor is identifying as another sexual minority,” he said. “The Bible does not state that it is a sin. There are passages that do mention it, but the difference comes from how we interpret those passages. People could see the same passage and some could infer that homosexuality is a sin while others would not. But what’s important is that we talk about our differences in thought and listen to each other’s ideas.”

Lee referred to the Book of Leviticus, Chapter 20, Verse 13, which reads, “If a man has sexual relations with a man as one does with a woman, both of them have done what is detestable. They are to be put to death; their blood will be on their own heads.”

This particular passage is often cited by Korean churches as an example of why homosexuality is wrong, but Lee says that even this passage can be and should be reread in the contemporary context. 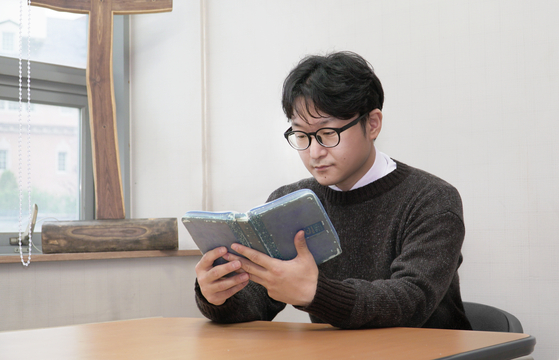 Pastor Lee Dong-hwan sits down for an interview with the Korea JoongAng Daily in his office in central Seoul. [JEON TAE-GYU] 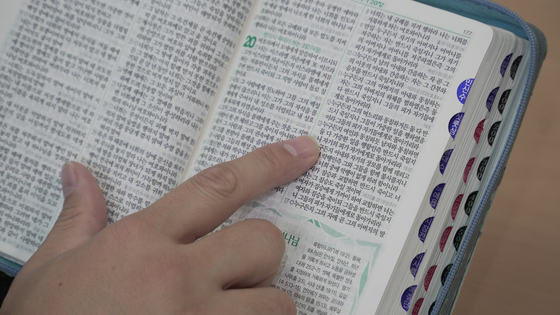 Pastor Lee Dong-hwan points to the Book of Leviticus, Chapter 20, Verse 13 during the interview. [JEON TAE-GYU]


“It says that a man who lies with a man should be put to death, but we don't kill people for that reason in real life, right?” he said. “The book spells out so many details in life, like don’t eat fish without scales or don’t wear clothes that are woven with more than two different types of fabric. These things were written in order to preserve the Israeli tradition, and that’s the meaning that we should take. I believe that studying the Bible means to find what context each passage was written in and how the essence of each leads to the truth. Taking it literally is a very dangerous thing to do.”

Lee went to church as a child with his parents, but didn't become a devout Christian until his final year of high school. He followed a friend to church and it was during a workshop that he saw God for the first time, after which he decided to attend a theological college. When it came time for him to be ordained, Lee realized that while many people attend church, very few of them live "Christian lives."

Lee believes that the church is responsible for not only leading people to heaven, but also making earth a heavenly place. To do so, he vowed to always look at the darkest corners of society and serve those who suffer in isolation.

“The important thing is to rethink ourselves in the zeitgeist," he said. "It’s not the individual passages of the Bible that matter — it’s the teachings and the love of God. Looking at the life of Jesus teaches us how there should be no discrimination against people and the pastors should stand with the most vulnerable. There can be differences in how people think and act, but the church should not be the first to cast people out and turn its back against them. That's not God's love.” 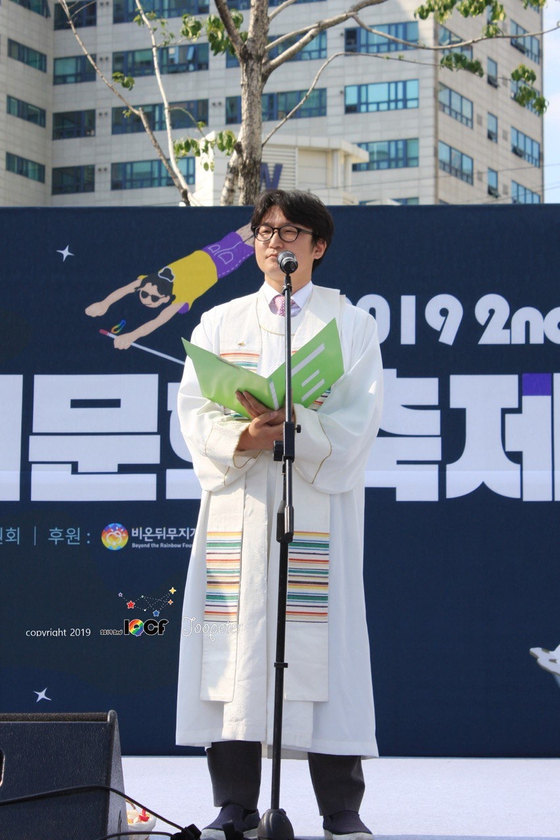 
He says giving blessings are a pastor’s job and he was carrying out God’s will. A blessing is not about who gives it or who receives it, but rather, the will of God that’s being spread to the people. No scripture lays out who can be blessed or not, and everybody has the right to receive a blessing. Pastors volunteer at prisons to bless inmates because everyone is loved by God. God’s love discriminates against no one and everyone is precious to God, Lee says.

His life may have been turned upside down the day he took to the stage at the queer festival, but Lee has no regrets and says he'd do the whole thing over again — but this time, with a smile.

“I have no regrets,” he said. “But there is one thing that I feel a little dissatisfied about. Because I had already gotten so many calls from people from the day before and that very morning, I was so scared when I stood on that stage. I’m really easily frightened (laughs). There were people coming up to ask me ‘Are you Lee Dong-hwan?’ and taking pictures of me from far away for evidence. I started to feel like something was happening and so all the pictures and videos show me with a serious face because I was so nervous. But I should have smiled when I threw the petals — it was a blessing. If I could go back, I would put on the biggest smile.”