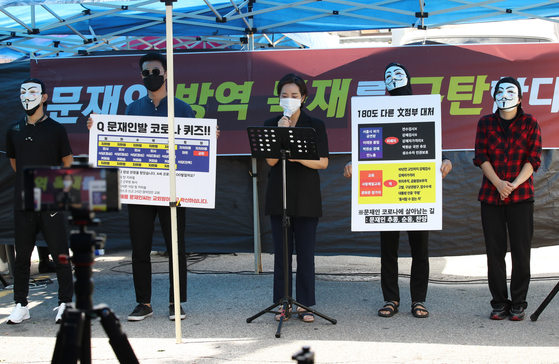 Kang Yeon-jae, center, a lawyer for Rev. Jun Kwang-hoon of the Sarang Jeil Church, reads the pastor’s statement on his behalf Thursday in front of the church in Seongbuk District, central Seoul. [YONHAP]

Rev. Jun Kwang-hoon of the Sarang Jeil Church — the epicenter of Korea’s latest coronavirus outbreak — adamantly refused to take responsibility for the recent spike in cases Thursday, while calling on churches nationwide to “combine forces” to fight the Moon Jae-in administration’s "injustice."

The pastor’s statement was read by his lawyer in front of the Sarang Jeil Church in Seongbuk District, central Seoul, unlike Wednesday morning, when Jun personally stood in front of media cameras to slam Moon.

The Wednesday press conference was Jun’s first public appearance following his discharge from the hospital earlier that morning.

He tested positive for the coronavirus on Aug. 17, five days after an infection was detected at his church, which immediately led to Korea’s second-largest hot spot.

By Thursday at noon, the church cluster had reached 1,139 cases, according to data from the Korea Centers for Disease Control and Prevention (KCDC), 22 more than the previous day.

Health officials have already warned that the number of patients either seriously ill or critically ill was rising steeply in recent days.

Authorities have blamed Jun and his church on numerous occasions for hampering government measures to prevent the spread of the disease, alleging they submitted a redacted list of congregants and recent visitors after officials asked for a full list to conduct contact tracing. Jun — a scathing critic of Moon best known for his antigovernment rallies in Gwanghwamun, central Seoul — wasn’t on that list, the Seoul Metropolitan Government said.

Through his lawyer, Jun said Thursday he couldn’t agree with the Moon government about his church being responsible for over 1,000 infections, claiming the argument itself was “fake news” and “a serious case of defamation.”

Jun also called on Protestant churches to fight the administration’s unjust treatment of the church community, saying they were being falsely characterized as virus breeding grounds.

Jun’s searing criticism of Moon comes as police have begun investigating the pastor and his church for hampering government efforts to curb the second outbreak, now that he’s been discharged from the hospital.

Central health authorities and the Seoul Metropolitan Government both previously filed complaints against the Sarang Jeil Church with the police, but officers had said they would wait until Jun recovered from the coronavirus.

An official from the Seoul Central District Court said Thursday that a hearing schedule to decide whether Jun should be detained again will likely be determined soon as well.

Prosecutors had asked the court to revoke his bail soon after the cluster arose.

Jun was placed under pretrial detention last February on charges of breaching election laws ahead of the April general elections. He allegedly called on protesters to vote for conservative parties before the official election period had begun. He was released on bail in April after complaining about his deteriorating health and paying 50 million won ($42,000) to the court.