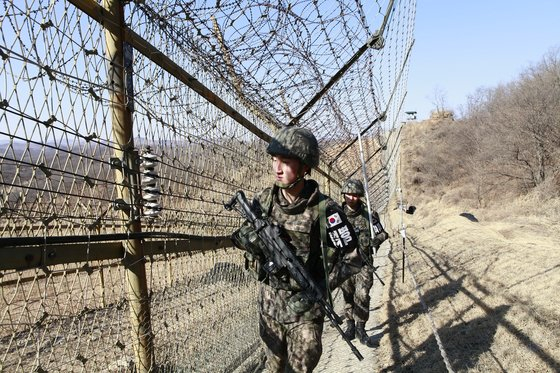 A barbed wire fence on the DMZ in Yeoncheon County, Gyeonggi. The photograph is not directly related to the story. [KOREAN ARMY]


The North Korean man who defected to the South early this month was a professional gymnast who slipped through two heavily guarded barbed wire fences in the demilitarized zone (DMZ), according to a military source in Seoul Tuesday.

Weighing only 50 kilograms (110 pounds) and having a slight build, the man was agile enough to leap over the 3-meter-tall (10 feet) fences in the DMZ to reach Goseong County, Gangwon, in the South on Nov. 3, said the source, who asked not to be named.

Heat sensors set up on the border to detect human and animal movements in the area failed to alert the infiltration at the time, leading to questions over the state of border security.

Shortly after the incident, Seoul’s Joint Chiefs of Staff (JCS) said there were no signs of significant damage to the fences where the man had crossed.

South Korean troops in the area were first alerted to the infiltration between 7 and 8 p.m. that day, and initiated a massive search operation in the area after a military alert was raised.

The man was eventually found within the civilian control line near the border, significantly south of South Korea’s closest guard posts in the DMZ.

According to sources, the man was a North Korean civilian who had formerly been a professional gymnast in the country. To prove he was capable of leaping over tall fences, he performed jumps in front of South Korean officials, the source said.

The man has since expressed a desire to defect to South Korea, but officials have not revealed the motives behind his escape from the North or why it took him 14 hours after crossing the southern fence to surrender to South Korean troops.

As to the failure of security systems on the border to detect the infiltration, military officials said they would review and correct the situation.

“Currently we are conducting a joint examination of the technical issues and functions of the scientific alert system along the border, in conjunction with [relevant] companies,” said Col. Kim Jun-rak, a spokesman for the JCS.

The last known North Korean defection across the inter-Korean land border before this one took place was in December 2018, when a soldier crossed the military demarcation line into the South.

A series of security breaches recently prompted a pledge from the South Korean military to beef up its surveillance and tighten discipline among service members.