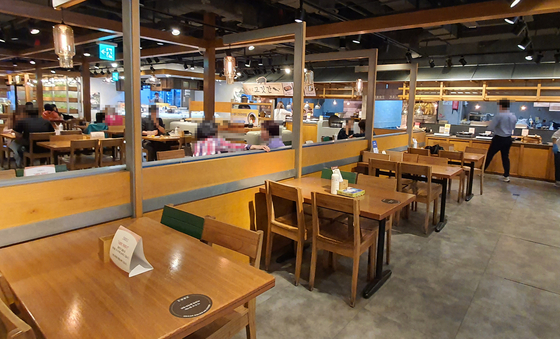 A buffet restaurant sits nearly empty in Seoul after resuming operations in early October, after being closed for two months. [YONHAP]


Restaurants struggling for survival want the government to resume its discount coupon program and allow them to stay open after 9 p.m.

The government announced in early October the resumption of the discount voucher distribution for eight types of businesses to boost consumption and kick-start an economy troubled by the pandemic.

On Nov. 22, the administration stopped all coupons from being used after it increased the social distancing level up a notch to Level 2.

A 10,000-won ($9) cash reward from credit card companies for every third purchase of more than 20,000 won at a restaurant was rolled out by the government to motivate more people to dine at local businesses. But it has been halted.

“It’s excessive for the government to ban people from using restaurant discount coupons when they can be used before 9 p.m.,” read the statement from the Korea Food Industry Association, Wednesday. “Operating hours should be expanded to 11 p.m., the Maginot Line for us to continue normal dinner operations.”

The association said the government’s curfew will have a negative impact on businesses where owners are already closing or cutting staff. Sales at restaurants could drop about 30 to 40 percent, they said, not to mention the missed opportunity to boost sales from canceled end-of-the-year events.

The restaurant business has been suffering as a result of the pandemic the entire year.

Credit card payments made at restaurants between January to September this year dropped by 10 percent compared to the corresponding period last year, according to data from the Korea Foodservice Industry Research Institute, collected from five food delivery apps and restaurants partnering with Shinhan Card.

In an attempt to survive the pandemic, food services and restaurants are strengthening delivery capabilities. Starbucks decided last week to deliver some beverages and desserts, starting with its store in Yeoksam, southern Seoul

CJ Foodville expanded delivery services for VIPS, its family restaurant chain, from two areas in Seoul to nine regions in Seoul and certain areas in Incheon this year. Elandeats started a delivery service for its Ashley buffet chain and its Nature Kitchen Korean food buffet in September.

"The industry has endured unprecedented damage in sales this year. In order to prevent massive layoffs and unemployment, and overcome the recession from the pandemic, restaurant coupons need to resume immediately,” added the association.