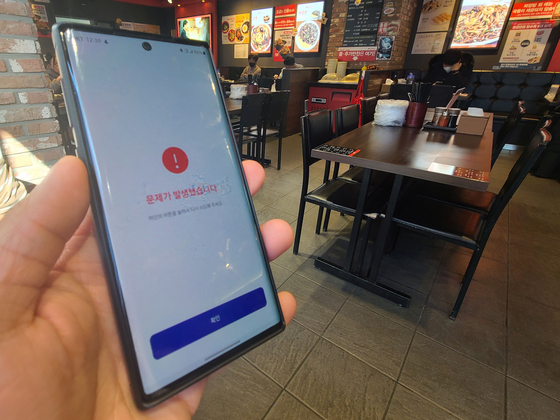 The COOV app crashed due to system traffic during lunch hours on Dec. 13. From Dec. 13, Korea is requiring people to present vaccine passes to enter 16 types of facilities including cafes and restaurants. Some people bypass the system through illegal loopholes. [YONHAP]

One restaurant worker from Songpa District, southern Seoul, who asked to be identified by only his surname Kim, discovered this when he scanned a vaccine pass presented to him by a man who came in to the restaurant to eat.

“The vaccine pass he showed me was registered under a woman’s name,” Kim recalled. He asked the man for identification that matched the vaccine pass, which led to the man admitting he had not, in fact, been vaccinated.

“Now that I know I have to individually verify customers’ vaccine passes, I have more work to do,” Kim said with an exasperated laugh.

Two years into the Covid-19 pandemic, Korea’s stiffened restrictions on public life for the unvaccinated and dire warnings from public health authorities about the country’s mounting daily caseload and shortage of intensive care units are failing to command adherence to anti-disease measures among those who refuse to be inoculated without any valid medical reason for abstaining.

Deliberate evasion of vaccine pass regulations have sprung up in various forms. One method used by the unvaccinated to thwart vaccine pass restrictions involves using a Naver ID belonging to a vaccinated individual.

Naver IDs tied to phone numbers registered at vaccination clinics by people when they receive their inoculations also show their vaccination status. However, unvaccinated people can easily bypass the system by buying the Naver log-in details of a vaccinated person and using it as their own vaccine pass.

On the secondhand shopping application Danggeun Market, posts have sprung up in recent weeks offering to buy Naver log-in details belonging to vaccinated individuals. The writer of one such post suggested he would be willing to pay 50,000 won ($42) for a vaccinated person’s Naver ID.

On other online sites, some people advised others on how to forge a negative result on a polymerase chain reaction (PCR) test, the standard procedure used to screen an individual for a Covid-19 infection, which can be used for a limited amount of time in place of a regular vaccine pass.

“Just copy and paste this message showing a negative result on the PCR test, and change the name in the text to yours,” one commentator wrote, showing a standard test result notification sent to testers' phones by screening clinics.

The onus to check the authenticity of vaccine passes presented by customers invariably falls on those working in businesses that require a customer present a vaccine pass for entry, leading to complaints among such business owners and their workers.

“It’s almost impossible the check whether a vaccine pass actually belongs to a customer at lunch and dinner times, when it’s practically too busy to even make sure that all patrons scan their passes,” said one restaurant worker in Seongnam, Gyeonggi.

“When customers show their vaccine passes, I usually have no choice but to believe that it’s actually theirs,” said a part-time cafe worker in Yongsan District, central Seoul.

Posts on online forum websites for small business owners also showed rising awareness of — and frustration with — customers presenting other people’s vaccine passes as their own.

“All business owners should be wary of unvaccinated youth in their early 20s borrowing vaccine passes from other people,” wrote one commentator.

Another wrote sarcastically, “It’s almost like we have to conduct our own crime scene investigation.”

Business owners who do catch customers, however, may face online reprisals by the unvaccinated individuals who were turned away at the door.

One Instagram account lists establishments that turned people away for their lack of a vaccine pass, warning its 5,500 followers to avoid such places “so they won’t end up going there and being denied entry.” The account has named around 100 restaurants and cafes nationwide.

Another Naver community page titled “Businesses that discriminate against unvaccinated people” was created on Friday. The page also lists “nice businesses” that it claims do not conduct vigorous vaccine pass inspections on patrons.

However, owners of most such restaurants denied they ever granted entry to customers who couldn’t prove their vaccination status.

“I only ever denied entry to two men, one of whom was unvaccinated,” said a 60-year-old restaurant owner surnamed Lee in Uijeongbu, Gyeonggi, whose business was among those listed for having lax inspection practices. “It makes me very upset that someone wrote a post like this.”