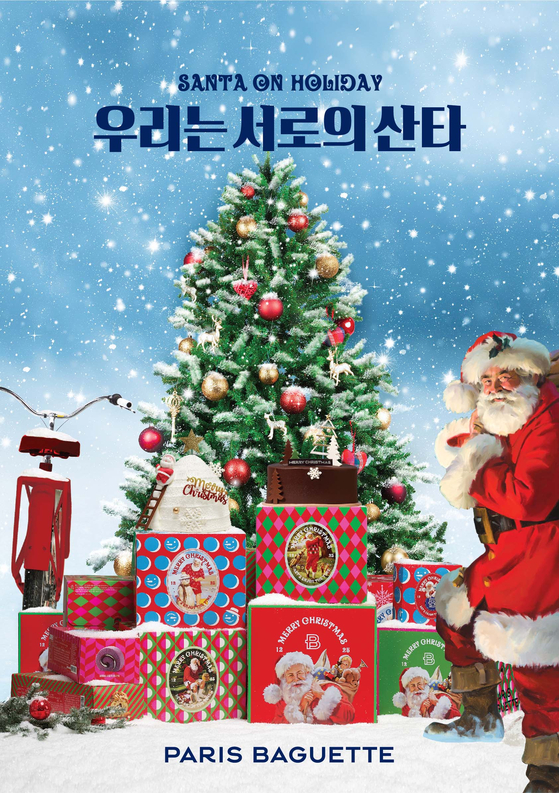 Paris Baguette launched its holiday seasonal campaign “We are the Santas for each other” on Nov. 23. [SPC]

Paris Baguette announced its new holiday campaign “We are the Santas for each other,” on Nov. 23, which will include more than 40 seasonal products.

Paris Baguette collaborated with artist Tom Browning, who specializes in depicting Father Christmas on canvas, for Santa Claus-themed artwork that has been applied to product packaging, physical stores, and on edible products.

The most notable Santa-themed product line is the “Santa on Holiday” cake series. The series includes: “Santa is on vacation,” a chocolate sponge cake garnished with chocolate ganache cream; “Santa cake from Santa himself,” a white mascarpone cheese cream cake; and “Hohoho Merry Christmas,” a chocolate sponge sheet cake decorated with Santa and his most trusted reindeer Rudolph.

Pengsoo, a popular penguin character from the Korea Educational Broadcasting System (EBS) also joined forces with Paris Baguette and took on the role of Santa for the “Merry Christmas with Pengsoo Santa” chocolate cake.

Paris Baguette offers various other cakes and sweet treats which feature characters such as Pororo, Rupi and Secret Jouju.

Paris Baguette also came up with a range of new items to attract customers over the holiday season. Products like nostalgic themed mocha cakes, holiday gift Gugelhupf cake lines, and small party packages with various sandwiches for parties at home are all part of Paris Baguette’s plan to ensure this holiday season is extra warm and bright.

“Covid-19 has dogged everybody’s livelihood throughout the year 2020. We hope the new holiday product lines and campaign can be solace to those who had a rough year,” an official from Paris Baguette said. “Paris Baguette will do its best to help you have the wholesome home Christmas party you deserve.”