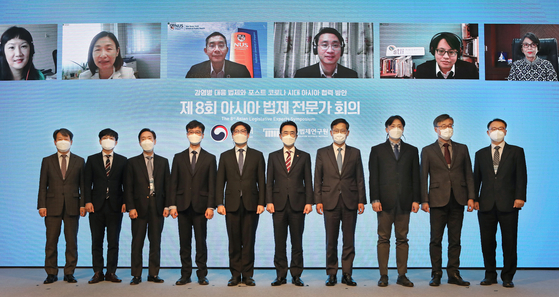 Asian legislative experts gathered virtually Wednesday at an annual law forum hosted by the Korean government to hear how Korea and other Asian countries tackled the coronavirus pandemic, and ways they can cooperate in the post-Covid-19 era.

The Ministry of Government Legislation hosted the 8th Asian Legislative Experts Symposium (ALES) at Millennium Hilton Seoul in Jung District, central Seoul, with a small in-person crowd due to social distancing guidelines, while speakers and experts from abroad joined online.

The ministry has been hosting the ALES annually since 2013 to promote “co-prosperity” among Asian countries.

Government Legislation Minister Lee Kang-seop during his opening remarks highlighted the importance of legislation in shaping policies, saying that at times like these, legislation underpins government efforts to effectively curb outbreaks of infectious diseases.

Korea’s own Infectious Disease Control and Prevention Act, he noted, has continuously been revised since Korea was hit by the Middle East respiratory syndrome (MERS) outbreak in 2015. The amendments enabled the country to create an effective “K-quarantine” model in responding to the coronavirus five years later, Lee continued.

Kim Kye-hong, president of the Korea Legislation Research Institute, urged Asian countries to boost legislative cooperation despite difficulties in face-to-face communication. Governments will be able to improve any flaws in their law systems by sharing their successful and unsuccessful experiences with others, Kim said.

Ra Sung-woong, vice commissioner of the Korea Disease Control and Prevention Agency (KDCA), highlighted the fact that the coronavirus has taught the world there are no borders when it comes to new infectious diseases, which is why governments should enhance dialogue channels to share information on a real-time basis.

Yeo, on behalf of the Blue House, vowed to expand cooperation among Korea, India and Asean members on numerous fronts, including people-to-people exchange, education, agriculture, industrial development and peace.

In the first session of the symposium, Lee Jun-seo, a senior research fellow at the Korea Legislation Research Institute, recapped the Korean government’s coronavirus response measures from the start of the pandemic when the first patient was diagnosed here in January, saying relevant acts underwent multiple rounds of amendments to adjust to changing circumstances of the outbreak.

Among several examples of changes presented, Lee said the Infectious Disease Control and Prevention Act was at one point amended to allow the government to force people to be tested when they're suspected to be a coronavirus patient. Such was the case with Korea’s 31st patient, he said, who was the first confirmed patient linked with the Shincheonji Church of Jesus in Daegu.

A huge cluster of over 4,300 patients emerged from the church shortly after she was diagnosed, and it remains Korea's largest cluster to date.

Nguyen Tien Duc, a research fellow at the Institute of State and Law in Vietnam, introduced Vietnam’s successful curb of its own Covid-19 outbreak. He credited that success to the government’s swift actions to close borders with China and cancel flights to and from the neighboring country after the first virus case was confirmed last January, in what he called part of a “proactive strategy.”

“Vietnam took precautions more quickly and stringently” than other countries, he said, implementing “harsh measures” to control the movements of people and essential goods. And by calling on the public to come together as one in fighting the pandemic, the research fellow said the Vietnamese government showed willingness to protect public health at the expense of the economy.

Te-Ying Wang, project manager at the Institute for Information Industry in Taiwan, elaborated on the preventive measures imposed by the Taiwanese government as early as late last year when the virus began to spread in Wuhan, the original epicenter of the virus. Wang said the Taiwanese government carried out on-board quarantine inspections for inbound flights from Wuhan.