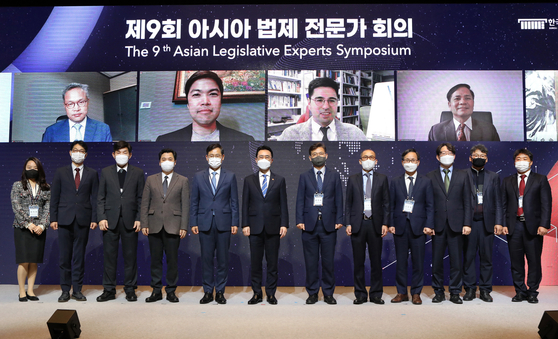 
Legislative experts from Korea and other Asian countries gathered virtually Wednesday at an annual law forum hosted in Seoul to share each country's legislative administration and work toward their further development.

The Government Legislation Ministry hosted the 9th Asian Legislative Experts Symposium (ALES) online and offline under the theme of "Legislative Administration of Each Asian Country and Cooperation Measures” at the JW Marriott Hotel in southern Seoul. Like last year, the 9th ALES was held with a limited in-person attendance due to social distancing guidelines, and it was also broadcasted live via the ministry's YouTube channel.

The ministry has been hosting the event annually since 2013 to discuss ways to improve each country’s legislative system with government officials and experts from various Asian countries. In this year’s symposium, the ministry will promote the best practices of Korea’s legislation, such as the Administrative Law and legal information system, and aims to enhance mutual understanding between countries and discover specific fields of legislative exchanges and cooperative projects.

"Legislation is the process of making a bowl to hold national policies and of making a fence around the society at large," Government Legislation Minister Lee Kang-seop said during his opening remarks.

“The economic growth and social development of each country have been ensured based on legislation that is an institutional framework,” Lee said. “Like the saying, 'If you go together, you can go far,' if Asian countries share information and opinions together, we can establish better laws and systems.”

Divided into two sessions, the forum first examined the present and future of legislative administration in Korea and other Asian countries.

Ryu Chol-ho, director of the ministry's Office for Administrative Legislation Innovation, illustrated the enactment and content of the General Act on Public Administration.

With the need to reform administrative legislation, the enforcement decree of the General Act on Public Administration was promulgated on Sept. 24 this year. In order to achieve the expected effects of enacting such administration, Ryu cited “the completion of Administrative Law and strengthened protection of people’s rights,” “imposed administrative efficiency, unity and reliability” and “promotion of active administration and regulatory reforms.”

Ryu Jun-mo, director of the ministry's Legislative Information Division, then presented the Korean Law Information Service, through which all law information of Korea can be searched for in one place.

Officials from the governments of Indonesia and Vietnam followed, each sharing successful cases of their legislation.

Kardwiyana Ukar, head of the bureau of government internal affairs at the Secretariat Cabinet of Indonesia, introduced the establishment of a unified legislation institution.

“Indonesia is currently taking measure of its regulatory reform,” he said. Such reform will be performed by establishing the institution, which will “have full authority of the whole aspects of legislation policy and process” under direct presidential control.

Nguyen Hong Tuyen, director-general of general affairs on legislative development at the Ministry of Justice of Vietnam, shared Vietnam's experience in legislation management. He introduced the Management of Law Construction Activities (Molca), which implements a number of basic solutions to improve the efficiency of law-making management and complete the legal system in a substantive manner in order to organize the implementation of the law.

Choi Ji-yeon, senior research fellow at the Korea Legislation Research Institute, first introduced past legislative cooperation between Korea and other Asian countries, including Uzbekistan, Thailand, Mongolia, Vietnam, Cambodia and Indonesia. She then made several suggestions of ways to move forward together.

Phalthy Hap, director of the graduate program of the Royal University of Law and Economics in Cambodia, presented Cambodia’s status of legislation and legislative administration, and Narun Popattanachai, legal counsel of the Office of the Council of State in Thailand, spoke about the international cooperation in legislation of Thailand.

Not Hong Kong as we know it (KOR)

How not to protect human rights (KOR)