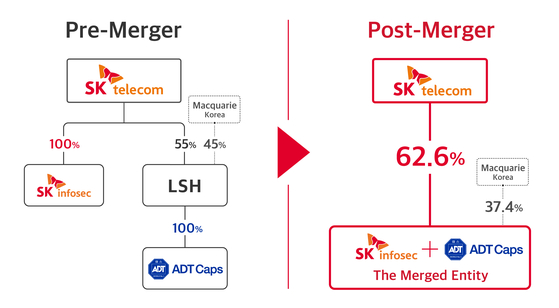 
SK Telecom will merge two security-related subsidiaries — ADT Caps and SK Infosec — with an aim of taking them public and moving further into the overseas market.


The combined entity will likely have market dominance, since SK Infosec is the top information security company in terms of market share and ADT Caps the second largest.


The new unit could be formed as early as March, according to the telecom company, if the process goes as planned. No time frame for the listing was offered.


After the merger, SK Telecom will directly own 62.6 percent of the merged unit, with Macquarie holding 37.4 percent.


The combination is intended to allow for the increased use of advanced technologies.


“SK Telecom will grow the merged entity into the No.1 convergence security company in Korea worth 5 trillion won [$4.5 billion] within three years of its launch by leveraging the advanced physical and information security technologies of ADT Caps and SK Infosec,” the company said in a statement.