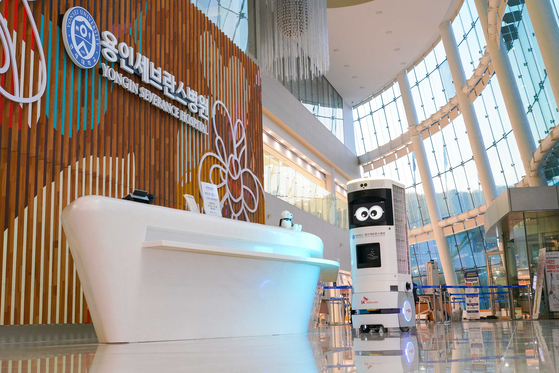 
SK Telecom has created a disinfection robot that is able to detect people gathering in groups and ask them to separate.

The company said that its “Keemi” robots started operations at Yongin Severance Hospital in Yongin, Gyeonggi, on Monday. Robots released under the Keemi brand specialize in hospitality services.

Keemi robots at the Yongin Severance Hospital will operate around the clock to check whether visitors are properly wearing their masks, measure their body temperature and prevent people from gathering in groups indoors. The self-driving robot is also capable of constantly reporting its real-time location to a central operating program.

Through its camera, Keemi can detect people hurdled up in groups of more than four. After spotting them, the robot will give verbal notifications telling them to keep their distance from each other. For disinfection, it can also emit an ultraviolet light to kill various types of germs. 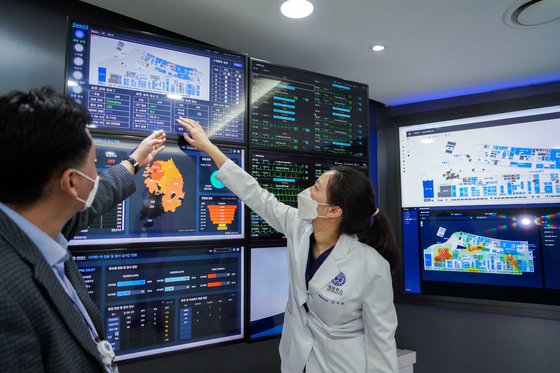 
SK said Keemi will make sure disinfection rules are followed around the clock.

“The 5G-powered disinfection robot is a significant achievement in that we suggested a new concept in building a ‘smart disinfection system’ for medical institutes,” said Choi Nak-hoon, who heads SK Telecom’s Smart Factory Company unit.

The implementation of Keemi was possible because of the 5G network infrastructure embedded at the site. Established in March 2020, Yongin Severance was the first local hospital to have a 5G network installed in the building.

The feature was part of a partnership it signed with SK Telecom in 2019 to build a “smart hospital.” Under a government-funded project, the two have been working together to develop IT infrastructure that could help disinfection efforts inside medical institutes since September last year.

“We’re glad to have produced a visible result with SK Telecom for smart disinfection,” said Choi Dong-hoon, Yongin Severance Hospital’s director. “As a hospital leading in digital innovation, we will push efforts to introduce new features that could appeal to our customers, in terms of safety and emotionally.”