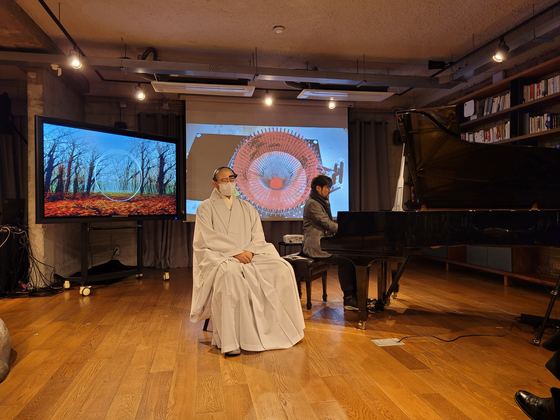 
A music listener’s affective state is woven into patterns on a scarf; this sounds very poetic, but there is a team of artists who actually practice it, helped by new technologies. The Berlin-based artist duo Varvara & Mar held their “Neuro-Knitting Beethoven” performance in collaboration with Korean pianist Jongwha Park and Buddhist monk Oh Shim at Art Center Nabi’s laboratory Tazak Madang in central Seoul on Friday evening.

Park played the famous “Piano Sonata No. 8 - Pathetique" and "Bagatelle No. 25 - Fur Elise" by the German classical maestro Ludwig van Beethoven (1770-1827), while Oh Shim, wearing an electroencephalography, or EEG, headset, listened calmly. His brainwave activity was recorded and transferred to a spinning machine in Estonia in real time and converted into a knitted pattern by the machine.

The result — a patterned scarf — is longer and has less black patterns than one created using an average listener’s brain activities, explained Melanie Bono, head of Cultural Programmes East Asia at Goethe Institut Korea, which held the event with Nabi. It is because the Buddhist monk, familiar with meditation, showed higher concentration levels, which increased the spinning machine’s speed, and his brain activity was more consistent, which caused less black patterns, according to Bono and the artists.

Oh Shim was very happy about it, saying “My fellow monks told me to fool the machine before the event and I did it!”

“The monk gave an interesting twist to our experiment,” Varvara Guljajeva of Varvara & Mar said in Estonia during a livestream video talk after the performance. “We started the experiment already in 2013 with Johann Sebastian Bach. Now, celebrating the 250th birthday of Beethoven, we offer a kind of visual interpretation of what’s going on in the mind of those who listen to his music, which will have more meaning, because Beethoven lost his ability to hear in his late years.”