"Sehando" by Joseon painter Kim Jeong-hui. The painting is designated as National Treasure No. 180. [NATIONAL MUSEUM OF KOREA]


The famous painting "Sehando" by scholar-calligrapher Chusa Kim Jeong-hui (1786-1856), is currently being exhibited at the National Museum of Korea's Special Exhibition Hall in central Seoul. It's been 14 years since the painting, which is designated as National Treasure No. 180, was last showcased to the public, displayed for a special exhibition commemorating the 150th anniversary of Kim's birth in 2006.

In the meantime, the national treasure remained in the state-run museum's storage, under strict instruction that it was to stay there unless otherwise authorized by its owner Sohn Chang-keun.

Early this year, the 91-year-old owner, who was handed down the valuable painting from his late father, decided to donate the painting to the National Museum of Korea, hoping that this "historically significant and artistically valuable work of art can be better appreciated by the public."

Sohn is a renowned art collector who donated over 300 artworks to the public, collected by him and his late father Sohn Se-ki, to the museum.

To mark this event, the museum organized a special exhibition titled "After Every Winter Comes Spring," which kicked off on Nov. 24. The exhibit focuses on two important paintings, "Sehando," and "Pyeongan Gamsa Hyangyeondo" (Welcoming Banquet for the Governor of Pyeongan) — which is another highly valuable painting of the Joseon Dynasty (1392-1910), presumed to be painted by Danwon Kim Hong-do (1745-1806).

When visitors enter the exhibition hall, they will encounter a dark narrow pathway, which provides an "emotional journey," says Oh Da-yeon, a researcher of the museum who curated the first section of the exhibit titled "Evergreens in Wintry Days."

"'Sehando' portrays the loneliness of Kim Jeong-hui as it was painted while he was in exile in Jeju. We believe when he painted it, he was cold and discouraged," said Oh. "We wanted visitors to delve into that tranquil and melancholic sentiment as they walk along the path before encountering the priceless painting of 'Sehando.'"

However it's not "Sehando" that visitors first encounter when the long and dark pathway ends. French filmmaker and media artist Jean-Julien Pous' black-and-white film featuring the landscape of Jeju Island is being played on two large screens. 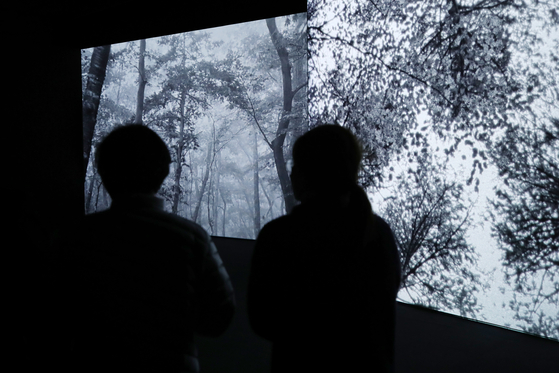 
The precious painting is displayed next, as part of a 15-meter (49 feet) scroll. Kim's painting is the original, measuring 70 centimeters in length, while the rest of the works attached next to it are writings of appreciations of the artwork written by four Koreans and 16 Chinese writers of the Qing Dynasty (1644-1911).

The Korean word sehan refers to the coldest period of the year, just before and after the Lunar New Year, and has thus come to symbolize the hardships of life. During this time of hardship, Kim painted "Sehando," which features four trees and a snow-covered cottage — a scene of Jeju Island — to show gratitude for his student named Yi Sang-jeok, who continued to send him books during his exile.

Kim's letters to his wife, friends and students, who continued to support him while he was on Jeju, are also on display. In many of these letters, Kim expressed his feelings of hardship and loneliness.

As Kim's "Sehando" was so highly valued even during the time it was created, it was taken to Japan in 1940 by a Japanese scholar named Fujitsuka Chikashi who purchased the painting for research. But Son managed to bring the painting back to Korea, by moving the Japanese scholar's heart and giving him assurance that "'Sehando' will be cherished forever in Korea," explained Oh. There's a seven-minute video at the exhibit, telling the story of how "Sehando" was safely returned to Korea.

While "Sehando," might be billed as the highlight of the exhibition, there's a lot to see in the second part as well.


Titled "Memorable Moments, Welcoming Banquets in the Spring," the centerpiece of the second part is a famous painting known as "Pyeongan Gamsa Hyangyeondo."

It is widely known that the painting was created by renowned Joseon painter Kim Hong-do, however, Yang Seung-mee, the curator of the exhibit said that there are debates as to whether Kim Hong-do is the real painter and studies are ongoing.

In contrast to the first part, the second part of the exhibition uses a lot of media art to showcase the painting in different ways.

"This is a media art exhibition, which provides an enhanced experience of appreciating cultural heritage through that medium," said Yang. 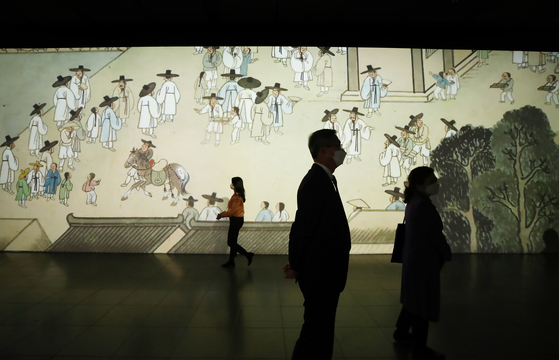 
There are of course the original paintings. Then there's a reinterpretation of a section of the painting in a media art form. Using large panels, the sections of the paintings have also been enlarged for visitors to take a closer look.

To show what traditional dances performed at banquets were really like, the museum worked with the National Dance Company of Korea to recreate some of the choreography and filmed it to screen as part of the exhibition. 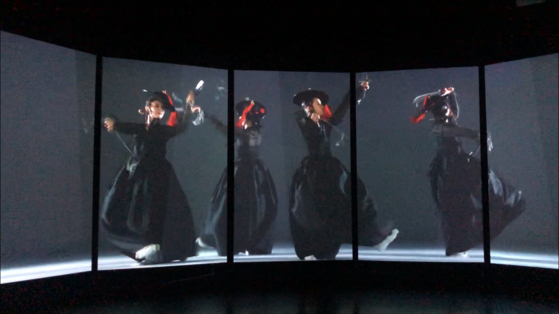 Dancers of the National Dance Comapny showcase the recreated traditional dances on the painting of the "Pyeongan Gamsa Hyangyeondo." [YIM SEUNG-HYE]


"The dance of gisaeng [female entertainers] was the highlight of these banquets," said Yang. "However, the painting cannot move, so we tried to present the vividness of the dance."

"This painting in the second section depicts banquets that are underway to welcome the newly appointed governor of Pyeongan-do Province," said Yang. "When the painting is exhibited inside a glass show case, it is difficult to see the hidden aspects or finer details and expressions of the people. To make up for any past disappointment in this respect, the exhibition aims to give visitors the joy and surprise of discovery."

"The two paintings in the first and second part of the exhibit may differ in theme, but have come together in this special exhibition as they have something in common — the people who share the joys and sorrows of life," Yang added.

After a decade of research and a century overseas, Oegyujanggak Uigwe is open to public