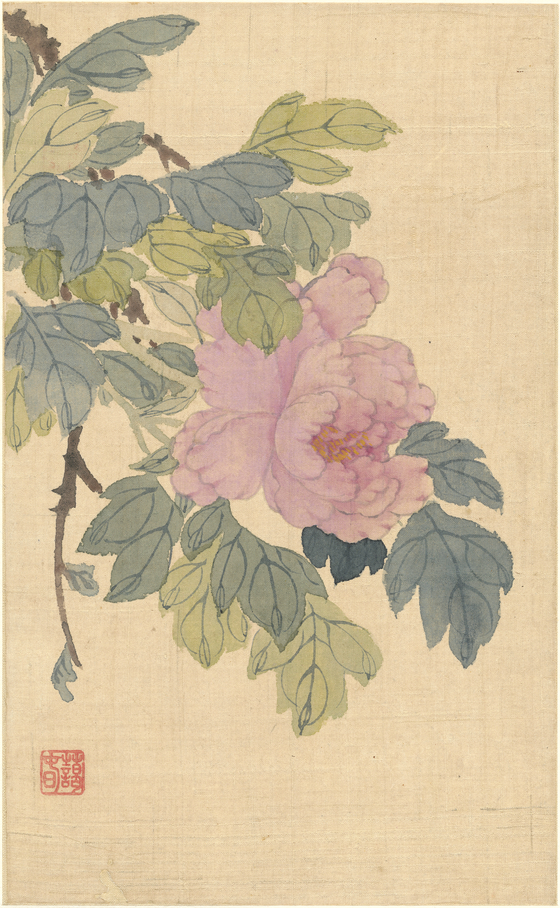 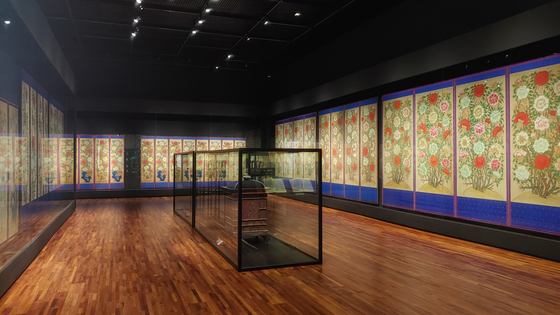 
Peonies were one of the most popular flowers used to decorate royal objects during the Joseon Dynasty (1392-1910).

As the “king of flowers” symbolized “wealth and prosperity,” peony designs were embroidered on dresses and textiles, painted on porcelain, engraved on furniture, and widely used as a motif in paintings. While it's no surprise to see the abundance of peony motifs used to decorate marital items, what’s lesser known is that peonies were also widely used to adorn items for the entire funeral rites process for Joseon kings and queens.

The National Palace Museum of Korea has organized a special exhibition titled, “Peonies: Flowers of Peace and Prosperity” to introduce the symbolic meaning of the flowers by exploring how the Joseon royal court enjoyed and used peonies in their plant form and in design elements. 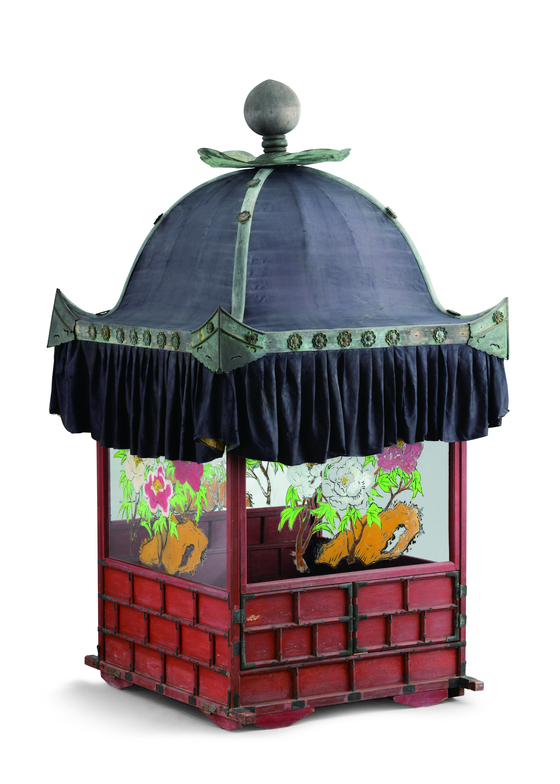 
“It was a surprise for me, especially, to find out that peonies served as a means to wish that the deceased would enjoy an afterlife as peaceful as the honor granted in this life, as well to hope for peace and prosperity for the royal family,” said Kim Dong-young, director of the National Palace Museum of Korea. “The exhibition will allow visitors to explore the culture of the Joseon royal court and the Korean imperial court through this royal flower.”

It is presumed that peonies were introduced to Korea during the reign of King Jinpyeong (r.579-632) of Silla Dynasty (57 B.C. to A.D. 935) and the popularity of the flower continued throughout the Joseon Dynasty. As it’s not an easy flower to cultivate, it is said that peonies were highly treasured, and only grown in the rear gardens of the royal palaces and in the gardens of Joseon scholars’ houses. They were also painted for visual appreciation and to decorate living spaces.

Historical records, such as “Records of the Office for Maintaining the Royal Palace Gardens” and “Records on Horticulture” (1670) by Heo Mok, document that lotus flowers and peonies were planted and enjoyed in the rear garden of Changdeok Palace. Peonies still bloom beautifully around the Changdeok Palace’s Nakseonjae Hall every spring. The scent has been collected from the peonies in the palace's gardens and has been turned into a perfume which is featured in the first section of the exhibit, “Growing and Enjoying Peonies.” 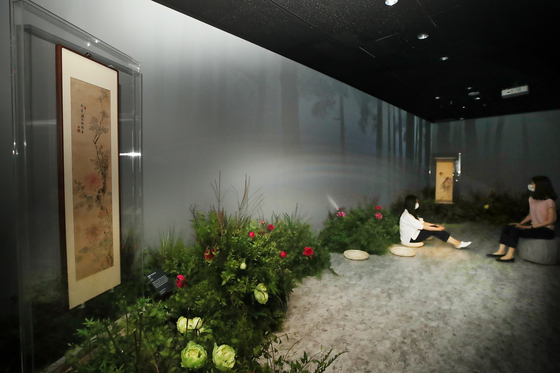 The "Peony Garden" in the first section allows visitors to sit down and enjoy the scent of the flower and a light breeze. [YONHAP]


As visitors walk into the large hall at the beginning of the exhibit, they will encounter a beautifully decorated peony garden. The experience is enriched by the floral fragrance of the Changdeok Palace peonies that penetrates through face masks. Fans have also been installed to allow visitors to feel a gentle breeze upon walking into the hall. Here, representative artworks that feature peonies are exhibited in different corners of the garden, such as “A Peony from the Paintings of Landscapes and Flowers” by Shin Myeong-yeon (1808-86), “Painting Album of Peonies” by Heo Ryeon (1808-92), and “Peonies and Butterflies” by Nam Gye-u (1811-90), so that visitors can enjoy the flower through different senses. The ink paintings by Heo were especially reputed at the time. King Heonjong (1827-49) even ordered him to paint peonies while he watched on, attesting to the widespread popularity of peony paintings in and outside the royal court. 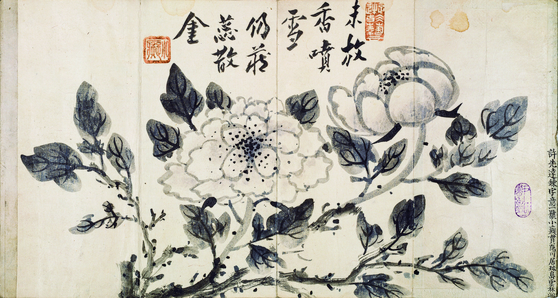 
In the second part of the exhibit titled “Blooming Peonies in Designs,” visitors can witness a variety of objects bearing peony designs that decorated the royal court and explore the meaning carried by each piece. An array of white porcelain pieces featuring peony designs in cobalt-blue are exhibited here, along with furniture and jewelry boxes. But the most dramatic use of peony designs embodying wishes for happy and abundant life can be found in marital items.

A bridal robe known as hwarot is considered a highlight piece and is being revealed to the public for the first time. Other than the fact that it was found in storage at Changdeok Palace, nothing was previously known about the gown. But after conducting multiple tests on the garment since 2016, researchers at the National Palace Museum discovered a paper padding inside the robe, which apparently was used to shape the gown. Surprisingly, the paper was revealed to be an answer sheet, produced by potential test takers, of a civil service exam held in 1880. 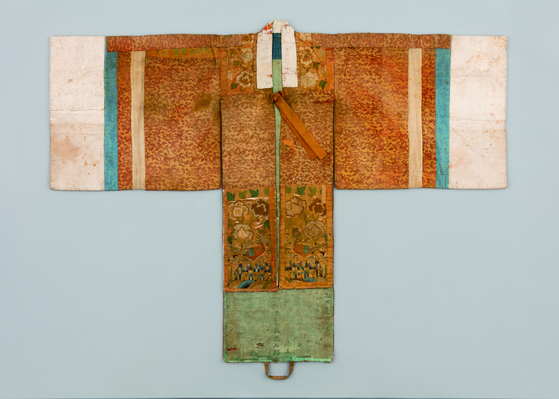 A wedding robe, known as hwarot, discovered in Changdeok Palace, is being exhibited for the first time. [CULTURAL HERITAGE ADMINISTRATION] 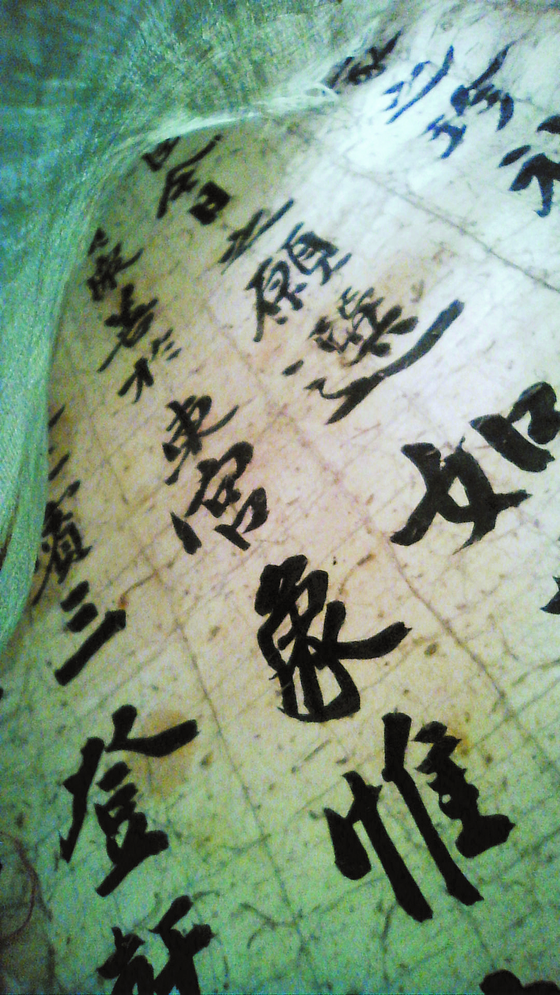 Paper padding was discovered inside the Changdeok Palace hwarot, allowing researchers to confirm the era in which it was produced. The paper was revealed to be an answer sheet, produced by potential test takers of a civil service exam held in 1880. [CULTURAL HERITAGE ADMINISTRATION]

Thanks to the discovery, it became the second hwarot whose production date is confirmed. Before the discovery, the only hwarot whose production date was known was Princess Bokon’s (1818-32), which is also displayed in this section. Produced in 1830, Princess Bokon, who was the second daughter of King Sunjo (1790-1834), wore the robe on her wedding day in 1832.

“Peonies Embodying Wishes for a Peaceful Royal Court and Prosperous Dynasty” is the final section, which highlights how the flowers were used in funeral ceremonies and rituals to honor ancestors in the royal court. Visitors will be able to learn how peony design were used in different stages of royal funeral rites, ranging from during royal protocols, on the chairs for laying a spirit tablet, on incense burners and on folding screens. The folding screens in particular were used throughout the entire funeral rites.

The exhibition hall of this section is surrounded by folding screens with peonies. Toward the end of the exhibit, a space depicting a shrine has been reproduced, showcasing what a space where ancestral rituals honoring the deceased kings with royal portraits would have looked like. 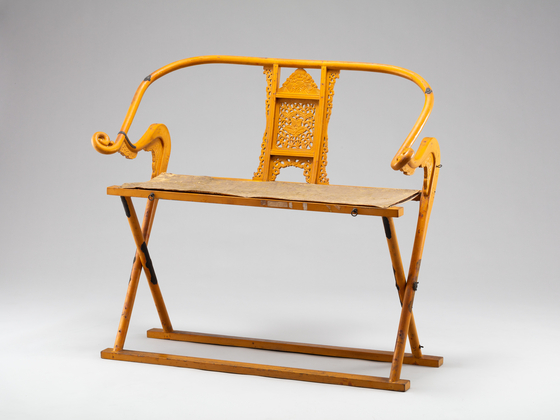 A chair for laying a spirit tablet with a peony design carved into it. [CULTURAL HERITAGE ADMINISTRATION]


“We hope this exhibition will offer visitors an opportunity to contemplate the beauty of peonies and come to appreciate the wishes of Koreans of the past for wealth and eternal peace and prosperity,” Kim said.

Visitors must make online reservations or register offline to enjoy the exhibit as the museum restricts the number of visitors in adherence with the government’s social distancing guideline amid the coronavirus pandemic.