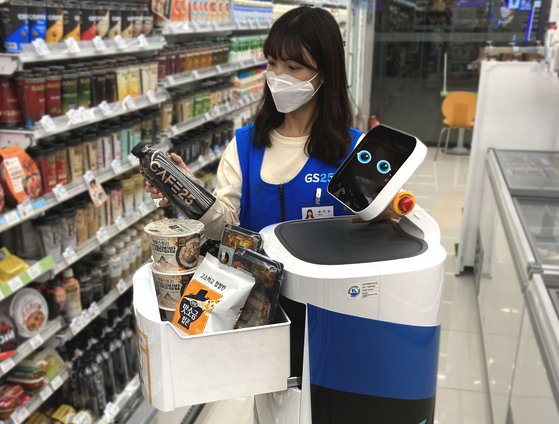 LG Electronics’ has brought in its CLOi robots to run the delivery service. Measuring 50 centimeters (20 inches) wide and 1.3 meters (4.3 feet) in height, the robot named Del25 has three drawers that can each hold up to 15 kilograms (33 pounds).

Customers place orders via messenger app KakaoTalk and have the items delivered straight to their office in the nine-floor building.

Based on the images of the building captured on its camera and a map, Del25 can find the shortest route possible to the destination. The robot is also capable of calling the elevator wirelessly. Once it reaches the destination floor, Del25 will phone the customer to say it has arrived and send a text message that contains a password to unlock one of the three drawers.

The longest trip inside the building from the GS25 convenience store to the ninth floor takes around five minutes, says GS25.

“Untact consumption and last-mile delivery are mainstream trends now,” said Park Sang-wook, leader of GS25’s marketing team. “The robot delivery service was launched as part of an effort to differentiate us in that realm.”