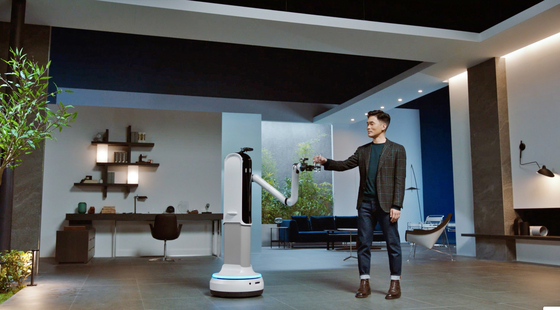 
Robotics company shares surged Monday on reports that Samsung Electronics upgraded the status of its robotics business team, a move that investors and analysts see as a prelude to the marketing of its robot products.

Multiple media outlets said on Sunday that the tech company advanced its task force on robotics to a business operation team in the recent management shake-up.

The electronics maker has introduced a series of prototype robots at international trade shows like CES, but it has never actually sold any of the prototypes.

Shares of Yujin Robot, an Incheon-based manufacturer specializing in robots used for logistics and delivery, reached the daily trading limit on Monday, jumping by 29.89 percent to close at 4,150 won ($3.51).

The surge was not based on any actual potential business with Samsung Electronics but rather optimism that the entry of Korea's largest company into the business will translate into a general robotics boom.

Robotis, a Kosdaq-listed maker of software for robot modules, jumped by 29.73 percent to close at 16,800 won while Roborobo, an education-focused robot maker listed on Kosdaq, rose by 7.47 percent to 3,740 won.

Hyulim Robot, a Kosdaq-listed intelligent robot maker, went up by 25.71 percent to 934 won and Robostar, an industrial robot developer a third owned by LG Electronics, rose by 15.46 percent to 22,400 won.

Samsung Electronics rolled out an elderly assistant robot named Samsung Bot Care at CES 2019, followed by the introduction of Handy, an autonomous bot designed to handle a wide range of household chores, at the same event this year.

The robot business task force was created at the end of last year under the consumer electronics division, according to a spokesperson at Samsung Electronics, but he declined to comment about the reports on the status change.

Samsung Electronics is known for forming a wide variety "task force" teams to verify the business feasibility of new technologies and services, upgrading the teams into a formal operations should the result turn out to be positive.

Another shift in the org chart includes merging the smartphone and consumer electronics businesses to become the DX division, short for device experience. It also changed the name of a division covering smartphone and network equipment from IT & Mobile Communications to MX, taken from mobile experience.

The change, announced by the electronics maker on Sunday, was expected, since it tapped Han Jong-hee, who headed the company's television business unit under the Consumer Electronics (CE) division, as vice chairman to head both consumer electronics and smartphone divisions.