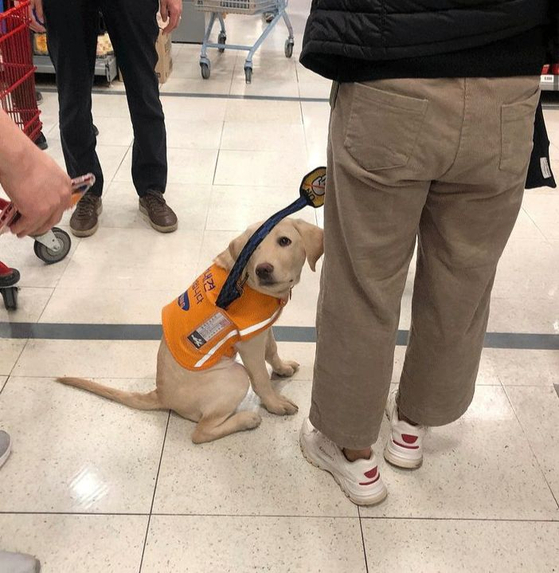 An Instagram post shows a trainee guide dog that was ejected along with its trainer from a Lotte Mart in Jamsil, southern Seoul, on Sunday. [SCREEN CAPTURE]


Lotte Mart apologized Monday after a guide dog trainer and their dog were kicked out of its Jamsil branch in southern Seoul on Sunday.

Lotte Mart came under fire on Sunday after an Instagram post showing what appeared to be a frightened dog cowering in Lotte Mart went viral. According to the post, which was from an eyewitness that was not involved in the incident, a Lotte Mart employee had told the guide dog trainer and the dog that they have to leave the building.

The dog was being trained as an assistance dog to guide blind and visually impaired people.

“The employee abruptly yelled at the customer, saying that she had brought a guide dog even though she was not disabled," the post said. "The dog looked so frightened of the situation. The woman who brought the dog cried."

The Instagram post added that the trainer had been allowed to enter Lotte Mart without issue and were only stopped when they were within the shop.

"Even if there is an issue, aren’t they supposed to treat the customer more politely?," the post continued. "I feel terrible about how [the employee] treated the customer.”

According to the witness, the dog was receiving “puppy walking,” part of the guide dog training. Puppy walking is the process where a trainee guide dog is taught how to respond to certain situations. Training takes place from approximately seven weeks of age for about a year. The volunteer who trains the dog is called a puppy walker.

The dog in the picture is wearing an orange-colored vest that says, “I’m being trained to be a guide dog.”


“We acknowledge that we were inconsiderate to a puppy walker who visited the Jamsil branch with the dog,” the Lotte Mart Instagram post said. “We promise Lotte Mart will clarify the guidelines regarding guide dogs, as well as puppy walkers, so that such incidents won’t happen again in the future.”

According to Article 40 of the Act on Welfare of Persons with Disabilities, the Lotte Mart employee's decision to eject the trainer and the dog actually breaks Korean law.

“When a person with a disability accompanied by a guide dog with the mark of a guide dog intends to use means of public transportation or enter public places, lodging facilities, restaurants, etc. frequented by many people, no one shall reject him or her without good reason," the act says. 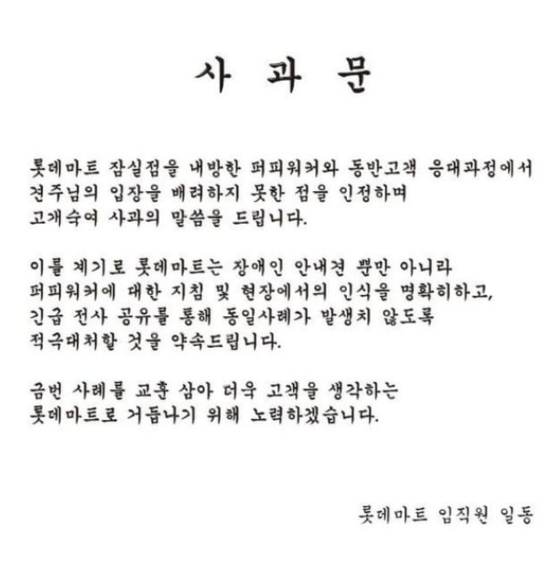 Lotte Mart uploaded a public apology on its Instagram Monday after it ejected a guide dog trainer who visited the branch with a dog that was being trained as a guide dog. [SCREEN CAPTURE]