Regional leadership is at the heart of CNU president's approach

Regional leadership is at the heart of CNU president's approach 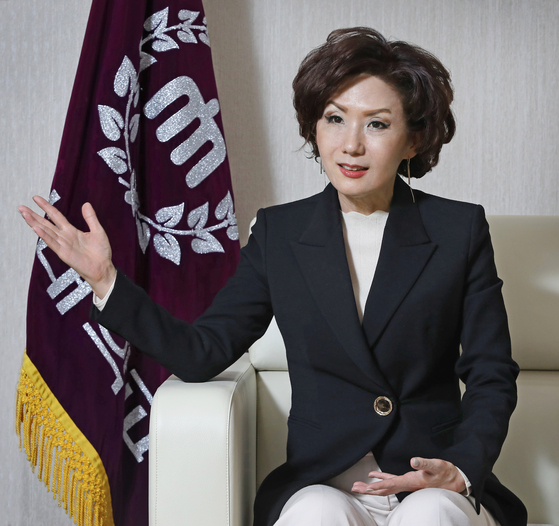 Lee Jin-sook, president of Chungnam National University (CNU) in Daejeon, speaks with the Korea JoongAng Daily in her office last month as she talks about several goals she wishes to achieve at her alma mater. [PARK SANG-MOON]

When Lee Jin-sook was elected president of Chungnam National University (CNU) in Daejeon early this year, dozens of local media outlets shed light on one thing she hadn’t thought of as an accomplishment — being a woman.

Lee, herself a CNU graduate, has worked as an architectural engineering professor at the university since 1989, while taking on other major administrative roles on campus and advising more than 30 committees in government offices and public organizations.

Yet in a country where very few women reach the apex in institutes of higher education, the press took more interest in the fact that she was the first female president of CNU.

Over the past nine months, Lee’s been trying to break ground once again — this time through her leadership — by looking 30 years toward the future and sowing seeds of innovation as her alma mater celebrates its centennial in 2052, endeavors that made newspapers in Daejeon and South Chungcheong naturally shift away from her gender.

The following are excerpts of a recent interview with Lee in her office, which were edited for clarity.

Local media used to frequently refer to you as “the first female president” of CNU. How did you feel about your gender being highlighted?


I’ve never really given myself extra credit for being a woman and I want to tell that to my female juniors, too, because in work there shouldn’t be any distinction between male and female. Even while serving as the president of CNU, I’ve never referred to myself as a “female president,” and that’s how things ought to be. I just happen to be a woman and the first female president of CNU. But I do feel like I should do well in order to set a good precedent, and in that sense, I feel a heavy responsibility.

You’re about nine months into your new job as the president of CNU. How has it been so far and what goals do you have for your four-year term?


I’ve had some really tough decisions to make on a daily basis, and I’ve come to realize it’s not an easy job to be a university president, especially amid the coronavirus pandemic. This year marks the 68th anniversary of CNU's foundation, and I’ll remain president when the school celebrates the 70th. While I’m here, I hope the school grows enough to create new value in time for the 100th anniversary. One of the first things I did as president of CNU was restructuring the school headquarters by newly establishing the role of vice president of research and industry-academics, the Office of Research Department and the Office of Regional Cooperation in order to shape a more research-based environment on campus and form a university-institute-industry cooperation model to work more closely with local society.

What do you mean by cooperating with local society?


We have numerous partnerships with government offices, public organizations and industries in local society, and they’re part of our aim to lead local innovation. Through these efforts, we want to be a school that’s beloved by local society, a school everyone in the neighborhood feels really close to. We also want to be a school that talented students in the region can look up to and feel proud of, a school they want to study at when they grow up.

I heard CNU is preparing to open a third campus in Sejong City.


We currently have two campuses in Daejeon — the Daedeok campus and Bowun campus. As a flagship national university representing Daejeon, Sejong and South Chungcheong, we’re hoping to build a third campus in Sejong City. The plan has been in the works for a long time, and we’ve submitted our application to the government to be a part of the new joint campus program in Sejong. The papers are now being reviewed. Our plan is to transfer preclinical departments from our College of Medicine on the Bowun campus to Sejong, and establish a new business incubation center, an institute of continuing education and a graduate school of multidisciplinary studies there to create a smart multidisciplinary campus. Sejong will lead Korea’s balanced development, and in order for the city to create good circumstances for people to settle down there, it needs a top-quality university. CNU will play that role. [Korea has 10 flagship national universities across the country, usually one in each province or major city, designated by the Korean government to promote balanced regional development. The Sejong joint campus program is a government-run initiative that seeks to attract universities and research institutes to an unused lot in Sejong that spans nearly 600,000 square meters (148 acres).]

Is it more effective to have your campuses dispersed rather than having them all in one place?


I think it’s a trend nowadays for universities to share campuses. We may not be the only university in Sejong, and in that case, we will have to be part of a larger academic model serving Sejong’s development. We’re considering a fourth campus in Naepo New City in South Chungcheong, and the same thing will happen there. We will have to cooperate with local society. As the flagship national university of Daejeon, South Chungcheong and Sejong City, we want to connect cities in this region and play an important role as the leader of regional innovation.

I heard that another project you’re pushing for is the CNU Honor Scholarship. Can you explain what that is?


I think it’s important to create an environment that allows brilliant students in local society to study and conduct research here without having to move to the Seoul metropolitan area [Seoul, Incheon and Gyeonggi], which is why I came up with the CNU Honor Scholarship program to offer as much as 200 million won [$179,000] to each student who enters CNU after receiving the highest of nine levels in every subject on the College Scholastic Ability Test [CSAT]. The scholarship will fund students’ tuition, dormitory fees and offer some allowance throughout their four years at CNU. In case they study abroad at a top graduate school to pursue a master’s or doctorate degree, the scholarship will offer some money they can use for living expenses, too. Our goal is to allow these students to focus solely on their education without worrying about any financial setbacks, and grow into elite professionals before returning to CNU and local society to contribute to training the younger generation here. Not only will this be a great asset to CNU, but it will also immensely help the local community and the country seek industrial development. I’ve been meeting many people lately to fundraise, and so far there have been five people who showed intent on donating. We’re not at the stage yet to publicly reveal any names, but one businessperson has promised to donate 500 million won, and I’m personally planning to donate 100 million won as well. My goal is to raise 3 billion won by the end of my term, and I’m confident we can get there because there are so many people who agree with what we’re trying to do.

Do you have anything planned for foreign students during your term?


The university is currently preparing to establish a division of international studies in 2022 in the hopes of recruiting more foreign students. While serving as the head of CNU’s Office of International Affairs, I noticed that foreign students tend to have a hard time adjusting to campus life here because they’re scattered throughout different departments. Korean professors, for their part, hesitate to offer admission to these students out of concerns they may not be able to catch up with classes. So my idea was to gather them all together in the division of international studies, where they can be taught and managed more systematically. In case they want to study something else, they can have a double major and take courses in other departments. When we think about the plummeting numbers of college students in Korea, we can no longer solely rely on domestic students to fill quotas. We have to actively invite students from abroad, and our goal is to attract them through our new division of international studies. We’ve submitted our application to the Ministry of Education this year, and I think the division will be up and running by 2022.

How do you want to be remembered?