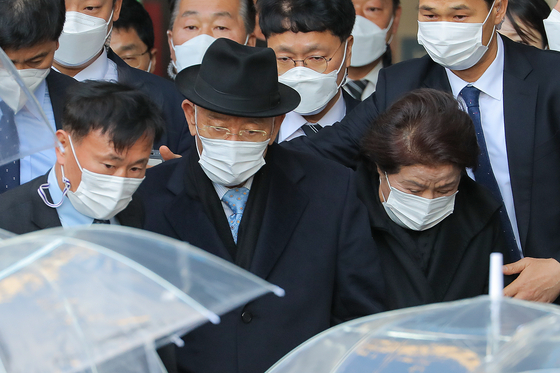 Former President Chun Doo Hwan, center, walks out of the Gwangju District Court accompanied by his wife after the court found him guilty of defaming a priest who was an eye witness to the military crackdown on pro-democracy demonstrators in Gwangju in 1980. [NEWS1]


The Gwangju District Court on Monday found former President Chun Doo Hwan guilty of defaming a priest who had documented the brutal military crackdown on pro-democracy demonstrators in Gwangju in 1980.

The court sentenced Chun, 89, to eight months in prison, suspended for two years. The ruling hinged on a determination that there were reasonable grounds to conclude that Chun was aware of the helicopter shootings in Gwangju on May 21 and May 27, 1980.

Chun was indicted without detention in May 2018 on charges that his controversial memoir, published in April 2017, defamed the late Catholic Priest Cho Pius, also known as Cho Chul-hyun, by denying his eyewitness account of the military’s bloody response to the Gwangju uprising and calling him a liar.

Chun's three-volume memoir, which largely defended his authoritarian rule, described Cho as a “shameless liar” and “Satan wearing a mask” for claiming soldiers commanded by Chun opened fire on pro-democracy demonstrators in Gwangju from a helicopter in May 1980.

Cho, a religious leader and democracy activist who died in 2016, was a participant in the uprising from May 18 to 27 who later testified in a parliamentary hearing in 1989 that machine-gun fire from a helicopter was one of the ways soldiers sent by Chun attempted to suppress the movement.

Days after the publication of the memoir, Cho's family filed a criminal complaint to the prosecution, accusing Chun of defaming the dead, which is a crime in Korea. Those convicted can face up to two years in prison or a fine of up to 5 million won ($4,500).

Chun was indicted in 2018 by Gwangju prosecutors. They recommended a jail sentence of 18 months for Chun.

Convicting a suspect of defamation of the dead requires proving that the victim’s honor was harmed by a falsehood. Chun’s conviction indicates that the court recognized the former president had intentionally denied knowledge of the helicopter shootings.

Kim added that among 16 other eyewitness accounts of the helicopter shootings, eight were deemed credible and backed by objective circumstantial evidence.

The court called on Chun to use the sentencing to “self-reflect and apologize sincerely.”

Earlier Monday morning, dozens of protesters denounced Chun as he left his residence in Seoul to attend the libel trial in Gwangju. Chun at one point shot back at one of the protesters, “Watch your mouth!”

Chun didn’t answer any reporters’ questions — including whether he acknowledged responsibility for the Gwangju massacre — as he walked into the court, guarded by dozens of policemen.

Chun, said to be suffering from Alzheimer's disease, was spotted dozing off 10 minutes into the trial.

Gwangju residents gathered in front of the court as Chun exited the building after the trial, some shouting, “Aren’t you going to apologize?”

Chun remained silent as he was escorted to his vehicle, at which some local residents threw eggs.

Chun was prosecuted in 1996 on charges of conspiracy and insurrection to hold him accountable for the Dec. 12, 1979, military coup and the deadly crackdown on the 1980 Gwangju uprising. Although he was initially convicted and sentenced to death, the punishment was later reduced to life imprisonment in appeals trials. He began serving jail time in April 1997, but his sentence was commuted by then President Kim Young-sam in December 1997.

Chun could appeal Monday's ruling, but neither he nor his lawyer have indicated publicly whether he intends to do so yet.