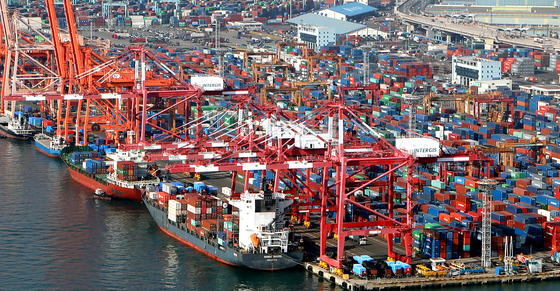 Cargo loaded up on a vessel headed overseas at a port in Busan on Tuesday. The OECD on Tuesday released a revised outlook that slightly lowered Korea's GDP growth for this year. It projected the Korean economy to contract 1.1 percent. In September that contraction was at 1 percent. [YONHAP]

The Organisation for Economic Cooperation and Development (OECD) slightly lowered its forecast for Korea’s 2020 economic growth.

Korea currently is facing a second resurgence of the global pandemic as daily confirmed cases are currently in the 400s.

The OECD on Tuesday projected Korea’s economy to contract 1.1 percent this year. That’s 0.1 percentage points lower than the projection made in September.

The OECD slightly raised the outlook not only on the global economy and the outlook for the United States and Japan, which also continue to suffer from the recent spike in coronavirus infections.

The OECD projected the global economy this year to contract 4.2 percent, but believes in 2021 it will expand 4.2 percent and in 2022 will grow 3.7 percent.

The adjustment was made under the assumption that a vaccine will be successfully distributed.

“Progress with vaccines and treatment have lifted expectations,” the OECD stated in its recent outlook. “The outlook continues to be exceptionally uncertain, with upside and downside risks.”

For Britain, the outlook went from the previous 10.1 percent contraction to 11.2 percent.

China is not a member of the OECD.

The OCED noted Korea’s “effective measures” in containing the spread of the virus, adding that the 1.1 percent is the “smallest decline in the OECD.”

It noted that Korea’s expansionary policies has limited the Covid-19 shock and lauded the government’s Korean New Deal.

“The sizeable digital and green investment of the New Deal will buttress the recovery,” it stated.

It also said the government fiscal rules, which will be implemented starting 2025, will “reinforce long-term sustainability in the face of rapid aging.”